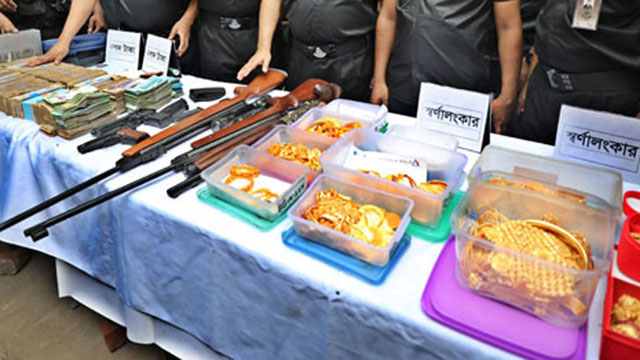 The Rapid Action Battalion has seized around Tk26.55 crore during a raid at the house of former Awami League leaders Enamul Haque Enu and his brother Rupon Bhuiyan in Old Dhaka.

RAB 3 Operation Officer ABM Faijul Islam said on Tuesday morning: “Acting on a tip-off, we conducted an overnight drive at the house on Lalmohan Saha Street and recovered the huge amount of cash from five safes.”

He added: “TK5 crore FDR, gold ornaments of around 1kg, and casino equipment were also seized in the raid.”

He said: “We did not find anyone in the house when we broke into it."

Earlier on January 13, the Criminal Investigation Department (CID) of police arrested Enamul, Rupon, and their associate Sheikh Sunny Mostafa in Keraniganj of Dhaka for their alleged link with casino businesses.

Enamul is the director of Dhaka Wanderers Club and the sacked vice-president of the Awami League's Gandaria unit, while his brother Rupon, also a shareholder of the club, is the joint general secretary of the same unit.

In September last year, RAB filed seven cases against the brothers, a day after seizing huge amount of money and gold, alongside firearms, from their houses during a raid in Old Dhaka.