Khaleda Zia’s family worried over her release from jail alive 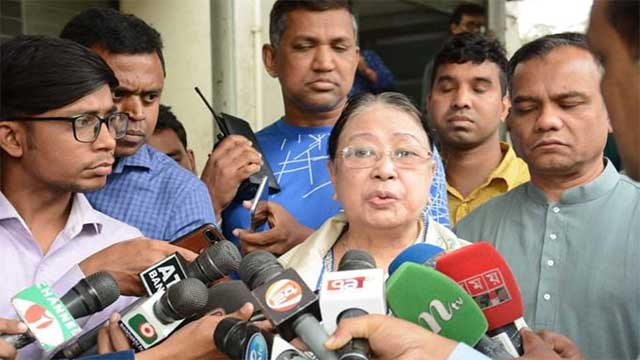 “Her (Khaleda’s) health condition remains unchanged. She’s facing difficulties in breathing due to her respiratory problem. Her left hand has got bent fully while the right one is also getting bent,” said Selima.

She was talking to newsmen after meeting her sister at Bangabandhu Sheikh Mujib Medical University (BSMMU) on Saturday.

Selima said the BNP chairperson is unable to stand up straight while she has been suffering from acute back pain.

“Her physical condition is very bad. She should be released on humanitarian ground. The way her condition has deteriorated, we’re worried whether we would be able to take her [home] from here alive,” she said.

Selima also said Khaleda Zia is unable to eat anything properly due to vomiting problem.
Advertising

“Under the circumstances, we want the government to free her at least considering the humanitarian aspect,” she iterated.

They stayed there for about one hour and 15 minutes, said Shamsuddin Didar, a member of the BNP chairperson's media wing.

Khaleda has been in jail since she was convicted in the Zia Orphanage Trust case on 8 February, 2018. She was found guilty in another corruption case later the same year, though her party claims both cases are politically motivated.

The BNP chief has been receiving treatment at the BSMMU since 1 April last year.