Khaleda Zia's conditional release not comprehensible to us: BNP 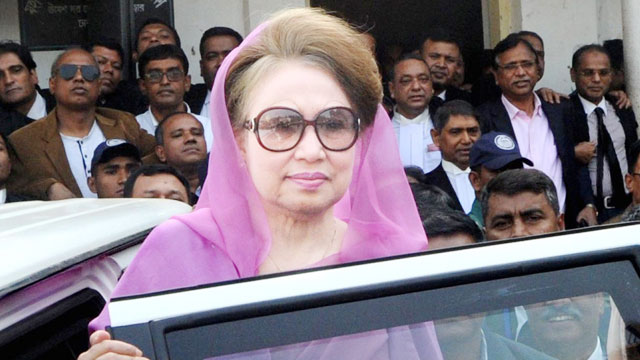 Bangladesh Nationalist Party chairperson Begum Khaleda Zia will be released from jail for six months on suspension of her sentences upon two conditions, said law minister Anisul Huq on Tuesday.

The conditions for her are -- receiving treatment staying at her Gulshan residence and not leaving the country. The minister said this at a press conference at his Gulshan office.

The law minister said they took the decision at the directives of prime minister Sheikh Hasina considering her age and humanitarian ground.

He said Khaleda Zia’s family recently submitted an application to the government seeking an executive order to have the BNP chief released for her treatment in London.

Khaleda Zia’s brother Shamim Eskandar, her sister Selima Islam along with her husband Rafiqul Islam met prime minister Sheikh Hasina and made an appeal for her release through the executive order, Anisul said.

He said he sent his opinion about Khaleda’s release to the home ministry.

He said the government’s order will come into effect when the home ministry releases her from jail.

The law minister said the government is going to release her following the legal process.

He further said if Khaleda needs to go to hospital, then she will be receiving treatment at the country’s most standard hospital.

The minister said the BNP chief will not be allowed to go abroad for treatment. “Sending anyone abroad under the current situation means pushing him/her to commit suicide.”

BNP secretary general Mirza Fakhrul Islam Alamgir said the worry of the country’s people about Khaleda’s health condition will be eased with her release from the prison.

"It (conditional release) is not comprehensible to us as her family submitted an application seeking her release and advance treatment,” he told newsmen after a meeting of the BNP standing committee members at her Gulshan residence.

A home ministry official said Khaleda may be released on Wednesday afternoon
"Nevertheless, the BNP leaders and activists, the people of the country now feel comfortable as she’s going to be released as per her legal and constitutional rights. We hope she can get out of jail soon,” the BNP leader added.

Fakhrul called upon the BNP leaders and activists not to gather at BSMMU and hold back their emotion for the safety of Khaleda and other patients at the hospital amid the spread of coronavirus in the country.

“We call upon our leaders and activists to remain calm and exercise restraint and avoid any gathering. Please, play a responsible role in this regard,” the BNP leader said.

He also asked the party rank and file not to throng near Khaleda’s Gulshan residence as it may cause harm to her.

He also said it depends on Khaleda’s decision that whether she receives treatment at her residence or at any hospital.

Meanwhile, a source at the home ministry said the law ministry’s recommendation about the BNP chairperson’s release reached the ministry by 5:00pm. The ministry will have to complete some procedures to free Khaleda.

According to the source, a summary of the law ministry’s recommendation for Khaleda’s release will be sent to the Prime Minister’s Office soon.

Upon approval by the prime minister, they will send it to the jail authorities for taking steps in this regard.

A home ministry official said Khaleda may be released on Wednesday afternoon.

Khaleda has been in jail since she was convicted in Zia Orphanage Trust corruption case on 8 February 2018.

She was found guilty in another corruption case later the same year, though her party claims both cases are politically motivated.

She has been receiving treatment at BSMMU since 1 April last year.