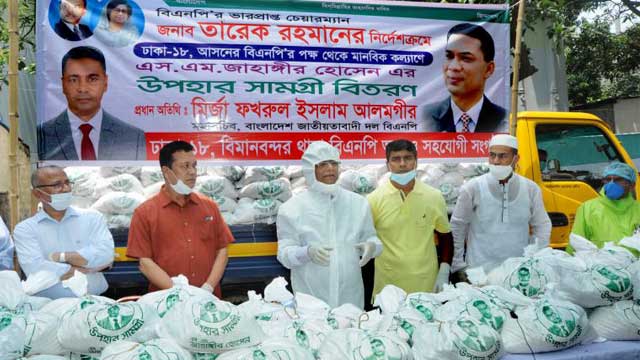 BNP on Monday alleged the government has been taking ‘impudent’ decisions having failed to tackle the coronavirus situation.

“The government has completely failed to deal with the situation and raise hope among people. They’re taking reckless decisions one after another that are only contributing to spread of the virus everywhere,” said party secretary general Mirza Fakhrul Islam Alamgir.

He came up with the remarks while distributing relief materials among the destitute in the city’s Uttar Dakshin Khan area arranged by BNP’s Airport thana unit and its different associate bodies.

The BNP leader criticised the government for what he said allowing reopening the RMG factories without ensuring proper health security of the workers. “The RMG workers in Savar, Ashulia, Gazipur and Narayanganj are now getting infected with the virus due to the government’s failure to ensure adequate security for them.”

He said though their party has been repeatedly calling upon the government to take prudent decision in consultation with political parties and experts, it is not paying heed to it.

“We don’t want to criticse the government at this bad time, but we’re only depicting the flaws of the government. We think government should face the current disaster with collective efforts by uniting all,” Fakhrul said.

He alleged that though people are going through serious ordeals, the government cannot show them the right path to overcome the sufferings and hurdles.

The BNP leader also accused the government of having failed to properly distribute the relief materials among the destitute and ease their sufferings.

He said their party leaders and activists have been standing before the needy people as per their ability since the beginning of the coronavirus shutdown.

Fakhrul urged the rich to extend their helping hands towards the poor and low-income people as the country is passing through a critical time.