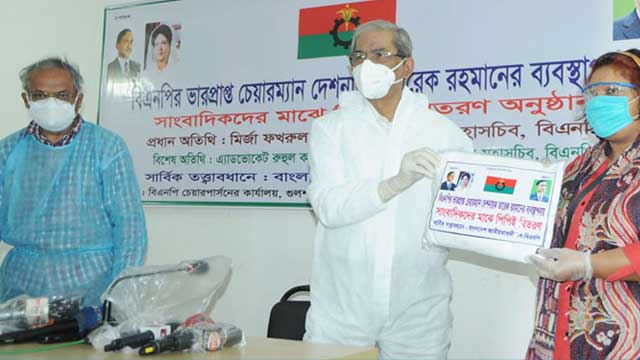 The Bangladesh Nationalist Party on Thursday complained that the government was imprisoning journalists under oppressive law for publishing the truth.

Addressing a ceremony at the party chairperson’s Gulshan office in Dhaka, the party secretary general Mirza Fakhrul Islam Alamgir made the comment against the backdrop of arrests of at least eight journalists last week under Digital Security Act.

The party organised the ceremony where sets of personal protection equipment on behalf of the party’s acting chairman Tarique Rahman were distributed among journalists.

‘This is quite normal for a fascist government. When they think that publishing any news or information will go against their illegal power, they then commit attacks, arrest, torture or kill them or commit enforced disappearance,’ he said.

The Awami League government cannot tolerate voices of dissent since it took power in 2008 as they party intends to establish ‘one-party rule’, said Fakhrul.

He also said that the government did not announce any benefit for journalists during this tough time of coronavirus spread though it had announced Tk 95,000 crore package to tackle coronavirus situation.

The BNP leader alleged that the all the government decision taken later went against the interests of the people as they announced public holiday by keeping public transports to allow the people to spread across the country.

‘The government has even failed to put the people coming from abroad in quarantine,’ he added.

Fakhrul said that the government was now cheating people as the information provided by the government about the coronavirus infection was not correct.

He said that people did not believe in the government data on the infection as the death toll was shown lower when the infection rate was increasing.

Criticizing the government decision to open shopping malls at this stage when coronavirus infection had been spreading at a high rate, he said that the government’s claim to take the country to a middle income country and ‘role model in economy’ was totally false and was nothing but cheating.

The BNP leader said that the government had committed serious offence by allowing garments factories to start operations as the whole situation first prompted workers to go homes leaving factory areas and later forced them to return to their workplaces.