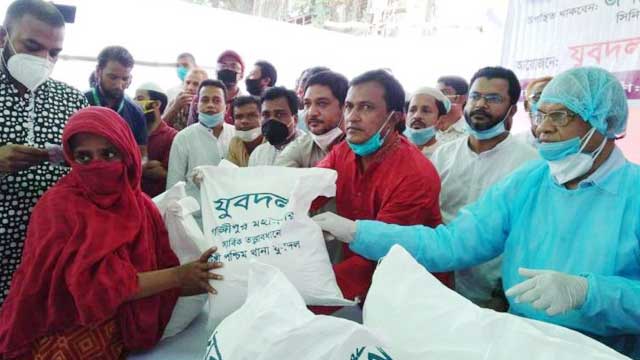 BNP on Friday alleged that the government is easing the shutdown only to protect the interests of big businesses ignoring the threat to people’s lives amid the sharp spike in coronavirus cases in the country.

“Why did the government relax the shutdown when the infection of coronavirus has spread to villages from the cities? They did it as the economy and interests of big businessmen are more important to them than people’s lives,” said party’s Senior Joint Secretary General Ruhul Kabir Rizvi.

He made the allegation while distributing relief materials among the needy at Tongi Bazar in Gazipur, reports UNB.

Rizvi said the government is least bothered about the deaths of people and public sufferings and safety.

He said people are dying from coronavirus as they are not getting treatment and the opportunity to undergo tests due to limited testing capacity.

He said: “The government is not paying attention to these problems as money, not people’s lives, is more important to them.”

“The national technical advisory committee to check Covid-19 also urged the prime minister to review the decision, but she is not paying heed to it,” he added.

Stating that the coronavirus situation will deteriorate sharply with the resumption of economic activities and people’s free movement, he said the government is trying to push people towards death.

Rizvi said the government could keep the shutdown in force for at least another two months in the interest of people’s health safety and containing the deadly virus.

He criticized the ruling party men for what indulging in embezzlement of relief materials meant for the poor, and not standing by the destitute to ease their sufferings during this crisis situation in the country.