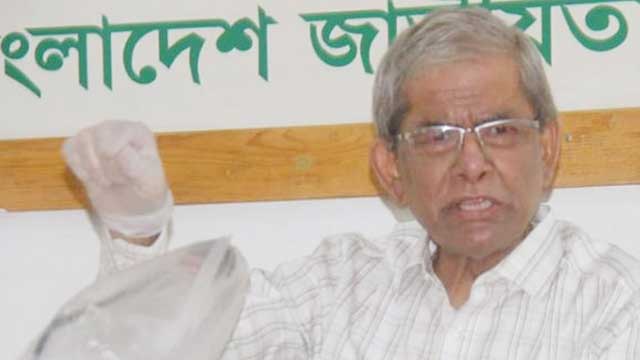 Speaking at a press conference at BNP Chairperson’s Gulshan office, he also demanded the government revoke the act.

"We would like to clearly say the current Digital Security ACT is being misused only to protect the government from public wraths. Such injustice by the state must be stopped without further delay,” the BNP leader said.

He further said, “The anti-people law (Digital Security Act) must be repealed. We condemn and protest the arrests and harassment of people by abusing various laws, including the Digital Security Act, across the country during the ongoing corona epidemic.”

Fakhrul questioned as to why the government is trying to hush up facts by resorting to repressive acts.

He demanded the government release those are arrested under the Digital Security Act and the political prisoners.

The BNP secretary general also called upon the government not to arrest anyone, except those involved in grievous crimes like rape and killing, until the courts are reopened and the situation gets normal.

He also demanded the government release political prisoners, including BNP leaders, and elderly persons, women and those convicted for minor offences with a condition that they will have to surrender after the resumption of the courts’ activities.

The BNP leader also called upon the government to ensure the coronavirus tests for all the jail officials and jail guards and necessary treatment for them.

He criticised the government for what he said arresting journalists, cartoonists, writers, businessmen and the people of other professions under the digital security act only for talking about its mismanagement and failure on the social media.

Fakhrul also alleged that leaders and activists of BNP and its associate bodies across the country are also being arrested continuously, creating panic among them when the country is under the grip of a deadly virus.

He also said the ruling party men who indulged in plundering relief materials are freely roaming around while ‘innocent’ people are getting arrested. “The government’s such activities are only exposing its cruel, inhuman and fascist attitude.”

The BNP leader said the government has issued different notifications to restrict journalists from writing against the misappropriation of relief materials like rice, wheat and oil. “It’s the responsibility of journalists to reveal facts and unfairness. But this is unfortunate that the government is pampering the corruption by issuing different notifications to hide facts.”