Rising attacks on freedom of expression, peaceful assembly must be stopped 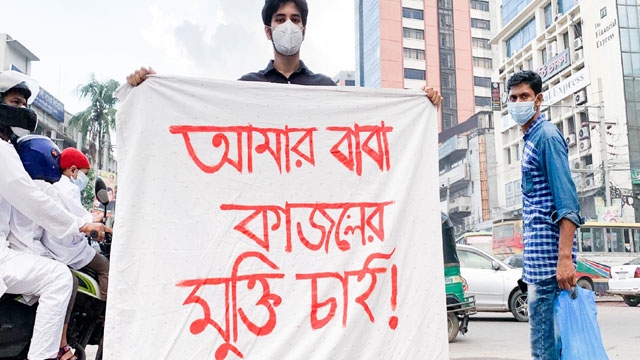 The Bangladeshi authorities must immediately stop all attacks on those peacefully exercising their rights to freedom of expression and peaceful assembly and urgently investigate a series of recent attacks, Amnesty International said today in light of recent attacks that include the enforced disappearance of a student activist.

Ashraf Uddin Mahdi, a 27-year-old student at Egypt’s Al Azhar University and a student activist, was forcibly disappeared on 6 August at around 11:00 pm. He was taken by unknown men from the capital’s Lalbag area while returning home after visiting his relatives. He was held incommunicado in an unknown location for 48 hours before being released amid intensified pressure from civil society organizations. Mahdi is a critic of the government with a large online following.

Mahdi told Amnesty International that the abductors released him on the condition that he would stop writing critical posts on social media about a few individuals affiliated with the regime.

Enforced disappearances have been increasingly on the rise in Bangladesh since the current regime assumed power in 2009. According to the Paris-based International Federation for Human Rights (FIDH), between 2009 and 2018, at least 507 people were subjected to enforced disappearances. Of them, 62 people were found dead, 286 returned alive, and the fate and whereabouts of 159 are still unknown.

“There is a disturbing pattern of enforced disappearances emerging in Bangladesh in recent years, mainly targeting people who express their dissenting political opinions. Ashraf Uddin Mahdi was forcibly disappeared from the centre of the capital as a brazen tactic to silence him,” said Sultan Mohammed Zakaria, South Asia Researcher at Amnesty International.

Student activists have also faced violence from groups closely associated with the ruling party to silence criticism of the authorities. On 8 August, members of Chattro League, the student wing of the ruling party Awami League, beat Saleh Uddin Sifat, a law student of Dhaka University, in the Sitakunda are of Chattogram district after accusing him of “anti-government activities” on social media. The attackers left Sifat in critical condition. He had to be transferred to a hospital where he is currently undergoing medical treatment.

On the same day, in the southern district of Barguna, local police violently dispersed a peaceful rally and human-chain organized to demand the release of Shahadul Islam, a graduate student of Stamford University. Police baton-charged and injured at least 10 individuals who were protesting peacefully. Videos seen by Amnesty International suggest that the police suppressed the human-chain violently without any provocation from the protesters.

“People’s rights to freedom of expression and peaceful assembly must be urgently upheld in Bangladesh. The authorities must allow people to express their critical views without fear of reprisals, and must immediately stop their campaign of forcibly disappearing those perceived to be critical of the government. All those incidents must be promptly and effectively investigated in an impartial and independent manner, and all those found responsible must be brought to justice in fair trials without recourse to the death penalty,” said Sultan Mohammed Zakaria.

The Bangladeshi authorities have intensified the crackdown on the rights to freedom of expression and peaceful assembly in recent years. In 2019 alone, at least 1,325 people were arrested in 732 cases filed under the draconian Digital Security Act (DSA) – more than three detentions per day. In 2020, the numbers of detained people under DSA crossed the 500 mark in the first half of the year. In recent weeks, authorities have arrested dozens of students, teachers, cartoonists, and human rights defenders for their critical social media posts, writings, and even caricatures.