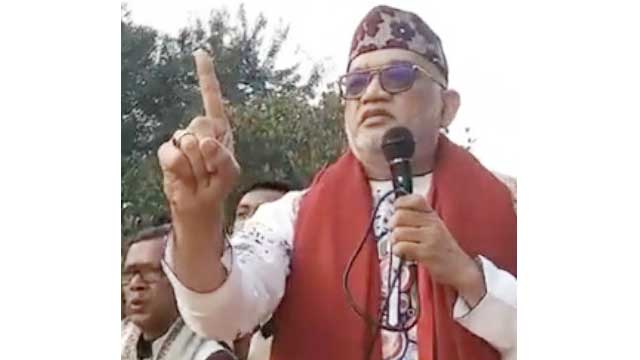 Omor Faruk Chowdhury, member of parliament for Rajshahi-1 (Tanor-Godagari) constituency and former district Awami League president, has come under fire for instructing leaders and activists to carry sticks to fight off members of the opposition at polling booths in the upcoming municipal elections.

Awami League leaders and workers said the MP’s statement, which violates the code of conduct, is a detriment to the party.

A 3 minute and 39 second video of Faruk’s speech at an extended Awami League staff meeting in Panchandar union in Tanore went viral on social media and caused public outcry on Monday.

In the video, MP Omor Faruk Chowdhury said: "During my election in 2008 I said to cut one hundred to two hundred sticks to keep at every centre. Didn't I say it? This was in 2008. You have to take that formula in your head. Sticks must be there. If you need to use it on polling day, use it. Otherwise, games will be played with the sticks after winning the election.”

Faruk Chowdhury also said: “The sticks will be used on the day of the election or on the next day… We have shown in 2018 how to send someone home. Don't you know? If not the formula of 2008, then the formula of 2018 has to be followed. There are two formulas.”

Targeting BNP, the MP said: “Why is BNP so excited? Well, I am explaining. You [public] defeated the one who gave birth to BNP in this land through votes. After being defeated, that gentleman died of a stroke. So, now probably some insects have risen from there. Do I need to talk about those? I don't think so."

Addressing leaders and workers of Awami League and its affiliated organizations at the upazila and union level at the end of his speech, Omor Faruk Chowdhury said: “Stay, see, vote, win, take up sticks, play with sticks, go home.”

Describing the statements as part of the MP's “terrorist activities” and “provocative statements,” local BNP leaders and activists have expressed concern over free and fair voting in the upcoming municipal elections.

Leaders and activists of a section of Awami League said such a statement by Faruk had tarnished the image of the party.

Adviser to BNP Chairperson Begum Khaleda Zia and former mayor of Rajshahi City Corporation Mizanur Rahman Minu said: “An MP of the government has left another sign of vote corruption by making such a public statement. The provocative statement of the MPs proves that no fair election is possible under this government.”

Asaduzzaman Asad, former general secretary of Rajshahi district Awami League, said: “Such arrogant statements of MPs are harmful to the organization. His statement does not go with the party mentality.

“Besides, there are many allegations against him in the party, including about his involvement in a heroin syndicate.”

MP Omor Faruk Chowdhury could not be reached for comment.

However, he told a local media worker: “Sticks can be given many meanings. I did not tell anyone to cause violence, I only said that games will be played with sticks after the election.”