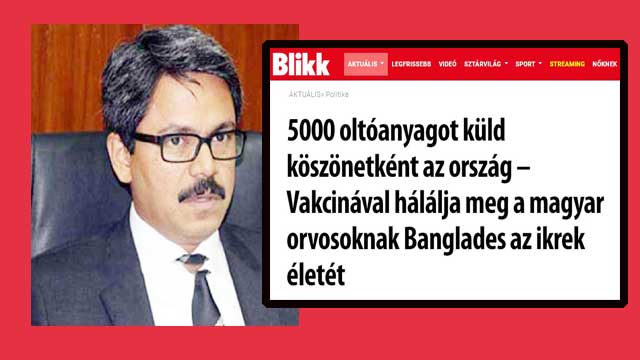 Hungary has declined Bangladesh’s offer to send 5,000 doses of the Oxford-AstraZeneca vaccine to the European country.

Hungary does not want to use the donation, its Foreign Ministry said, without mentioning the reason, reports Hungary Today.

“We thanked them for the offer, but will not accept it,” stated Hungary’s Ministry of Foreign Affairs and Trade.

Budapest-based tabloid Blikk on Wednesday reported that Bangladesh, as a token of appreciation for five hundred burn and restorative plastic surgeries performed pro bono by Hungarian doctors of the Action for Defenceless People Foundation, as well as the successful separation of Siamese twins, Rabeya and Rukaya, had offered 5,000 doses of the Oxford-AstraZeneca vaccine to Hungary.

On January 31, Bangladesh’s State Minister for Foreign Affairs Shahriar Alam told the parliament that Hungary had asked for 5,000 doses of the Oxford vaccine and that Bangladesh had considered the request.

When asked for remarks, State Minister for Foreign Affairs Shahriar Alam responded to a national daily saying, "I don't want to comment further on this matter."