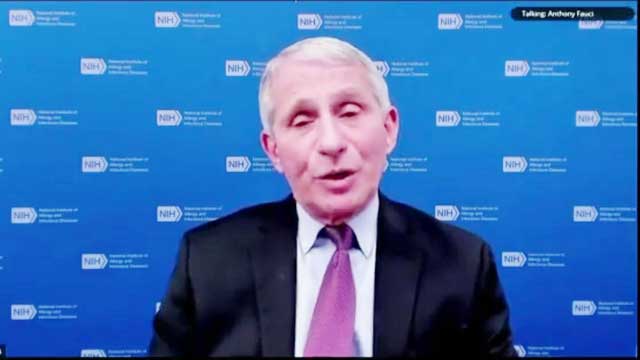 Dr. Anthony Fauci, Chief medical advisor to President Joe Biden, has said as long as you get the level of virus to such a low level where the test positivity is extremely low, then you could start thinking about returning to some degree of normality.

The top infection disease expert said this in a reply to a question raised by JustNewsBD state department correspondent at a virtual briefing organized by Foreign Press Centre of US Department of State on Friday.

The reporter asked “When we will get back to normal? As the virus started from Wuhan, they already started normal life. So when we will be back to normal as it was before? Thank you very much for your great work”

In response, the director of the National Institute of Allergy and Infectious Diseases said, “That could be answered easily by either Andy or I, and it really depends on what – again, the dynamics of the outbreak. And so let me give you a potential scenario.”

The physician continued saying that, “We have vaccines that we are going to be accelerating in the administration to people in this – in our country, in the United States. And it’s not going to be the same for every other country. But in the United States as a prototype, as an example, when we get maybe 70 to 85 percent of the people vaccinated, we would think that that would be the amount that you would likely need for herd immunity, which means you get a blanket of protection over the country and very little viral activity.”

Dr. Anthony Fauci further said, “We would hope that if our schedule for vaccinating people goes along with what we’re planning, that we will get to that point probably in the beginning of the fall of this year. And that would mean that we’d have to get an overwhelming proportion of the population vaccinated. If you successfully do that, the level of virus would be very, very low in the community. That being the case, we can gradually get back to some degree of normality. It’s not going to be like a light switch that you turn on and off: now, you’re abnormal, then you’re normal. It’s going to be a gradual pulling back in the stringency of the public health measures, such as getting people to be in restaurants maybe with limited seating, getting theaters open again, being in a situation where you could get schools open with no anxiety about spread in the school.”

“I would think if we do it right for us, it’s never going to be completely back to normal – there’s still going to be likely a requirement under certain circumstances to wear masks – but it likely will approach normal sometime as we get to the end of this year, provided the variants don’t give us a problem. But if we can control them, that likely would be.”

“Now having said that it might be very different for different countries, so – because what happens in the United States might be different with what happens in another country. As long as you get the level of virus to such a low level where the test positivity is extremely low, then you could start thinking about returning to some degree of normality,” the President’s top advisor added.