2018 parliamentary election was not considered free and fair by observers: US 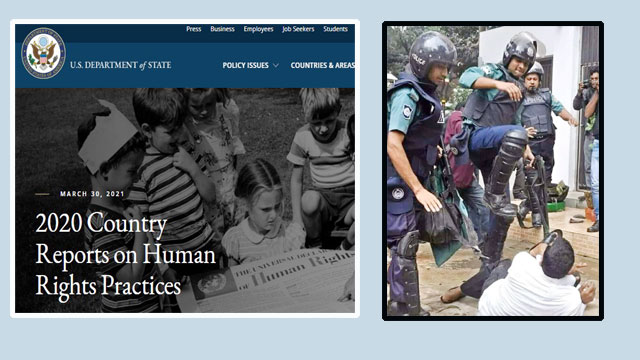 In a December 2018 parliamentary election, Sheikh Hasina and her Awami League party won a third consecutive five-year term that kept her in office as prime minister. This election was not considered free and fair by observers and was marred by reported irregularities, including ballot-box stuffing and intimidation of opposition polling agents and voters.

The US Department of State said this comment in its 2020 Country Reports on Human Rights Practices published on March 30.

The annual reports are qualitative observations regarding human rights practices for most countries in the world.

US Secretary of State, Antony Blinken, while releasing the report yesterday, noted that the 2020 observations reflect the unique challenges nations had to confront as Covid-19 spread throughout the world. "The pandemic impacted not only individuals' health but their abilities to safely enjoy their human rights and fundamental freedoms."

The report claims the Chinese authorities committed "genocide" against Uighur Muslims in the country and crimes against humanity "including imprisonment, torture, and enforced sterilisation". The report also stated that the Ortega regime in Nicaragua passed increasingly repressive laws that had severely limited the ability of opposition political groups and independent media to operate.

Significant human rights issues included: unlawful or arbitrary killings, including extrajudicial killings by the government or its agents; forced disappearance by the government or its agents; torture and cases of cruel, inhuman, or degrading treatment or punishment by the government or its agents; harsh and life-threatening prison conditions; arbitrary or unlawful detentions; arbitrary or unlawful interference with privacy; violence, threats of violence and arbitrary arrests of journalists and human rights activists, censorship, site blocking, and criminal libel; substantial interference with the rights of peaceful assembly and freedom of association, such as overly restrictive nongovernmental organization laws and restrictions on the activities of such organizations; restrictions on freedom of movement; restrictions on political participation; corruption; criminal violence against women and girls and lack of investigation and accountability; crimes involving violence or threats of violence targeting indigenous people; crimes involving violence against lesbian, gay, bisexual, transgender, and intersex persons; laws criminalizing consensual same-sex sexual conduct; significant restrictions on independent trade unions and workers’ rights; and the worst forms of child labor.

It said, “There were reports of widespread impunity for security force abuses. The government took few measures to investigate and prosecute cases of abuse and killing by security forces.”

About unlawful killings, the report said, “The constitution provides for the rights to life and personal liberty. There were numerous reports, however, that the government or its agents committed arbitrary or unlawful killings.”

“Law enforcement raids occurred throughout the year, primarily to counter terrorist activity, drugs, and illegal firearms. Suspicious deaths occurred during some raids, arrests, and other law enforcement operations. Security forces frequently accounted for such deaths by claiming–when they took a suspect in custody to a crime scene to recover weapons or identify coconspirators–accomplices fired on police and killed the suspect. The government usually described these deaths as “crossfire killings,” “gunfights,” or “encounter killings.” The media also used these terms to describe legitimate uses of police force. Human rights organizations and media outlets claimed many of these crossfire incidents actually constituted extrajudicial killings. Human rights organizations claimed in some cases law enforcement units detained, interrogated, and tortured suspects, brought them back to the scene of the original arrest, executed them, and ascribed the death to lawful self-defense in response to violent attacks.”

It said, “Police policy requires automatic internal investigations of all significant uses of force by police, including actions that resulted in serious physical injury or death, usually by a professional standards unit that reports directly to the Inspector General of Police. The government, however, neither released statistics on total killings by security personnel nor took comprehensive measures to investigate cases. Human rights groups expressed skepticism over the independence and professional standards of the units conducting these assessments. In the few known instances in which the government brought charges, those found guilty generally received administrative punishment.”

“In September, Amnesty International said more than 100 Rohingya refugees were victims of extrajudicial killings in the country since 2017. In Cox’s Bazar, the site of Rohingya refugee camps, Rohingya comprised a disproportionate percentage of reported “crossfire” killings. The press reported in July that security forces killed 22 individuals, suspected mostly of conducting drug deals, in reported gunfights with police. At least 10 were Rohingya.”

The government did not respond to a request from the UN Working Group on Enforced Disappearances to visit the country.

The report said, “On March 10, photojournalist and news editor Shafiqul Islam Kajol disappeared after leaving his house for work. The previous day a member of parliament filed a case against Kajol and 31 others, claiming a media story covering a crime syndicate involving drugs, money, and prostitution defamed the member of parliament. On May 3, police in the border town Benapole confirmed to the press that Kajol was “rescued” near the border with India border and detained him on trespassing charges. Kajol’s family told the press they believe Kajol was forcibly disappeared and held in government detention from March through May. Kajol spent 237 days in prison on defamation charges and was released on bail on December 25.”
About political prisoners, the report said, “There were reports of political prisoners or detainees. Political affiliation often appeared to be a factor in claims of arrest and prosecution of members of opposition parties, including through spurious charges under the pretext of responding to national security threats. Police jailed opposition party activists throughout the year for criticizing the government over its actions in managing COVID-19.”

It further said, “In February 2018 former prime minister of Bangladesh and chairperson of the opposition Bangladesh National Party (BNP), Khaleda Zia, was sentenced to five years’ imprisonment on corruption and embezzlement charges, which were first filed in 2008 under a nonpartisan caretaker government. In October 2018 the High Court increased her sentence to 10 years. International and domestic legal experts commented on the lack of evidence to support the conviction, suggesting a political ploy to remove the leader of the opposition from the electoral process. The courts were generally slow in considering petitions for bail on her behalf. In March the government suspended Zia’s sentence for six months on humanitarian grounds, and suspended it again in September for another six months. In both instances the government restricted Zia’s travel, saying she would receive medical treatment in Dhaka and could not travel abroad.”