NCN journalist under attack by Al men at NY

US concerned over suppression, intimidation of journalists in Bangladesh 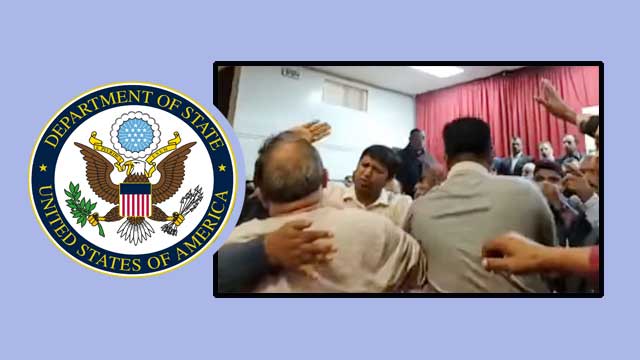 A State Department spokesperson on Thursday said this in response to a question from Just News about the ruling party AL’s brutal attack on NCN journalist Farid Alam at a press conference in New York.

The United States Awami League held a press conference at Queen’s Palace in New York on Wednesday to brief on Prime Minister Sheikh Hasina’s visit to the United States. The leaders of he party attacked journalist Farid Alam when he asked “why Prime minister Sheikh Hasina visiting for UNGA with 141 members delegation in this unusual time where other heads of state visiting with a small team or joining virtually from their own country and what is the outcome of this visit.”

At that moment, the briefer member of the PM delegation Abdus Sobhan Golap MP who is the press and publicity secretary of the ruling party AL started questioning to the journalist in a rude manner and other leaders jumped on journalist Farid Alam and assaulted him physically very inhumanly. A frightening situation was created in the press conference room. The present fellow journalists created a human shield to rescue him from this attack Farid Alam was later admitted to a New York hospital with serious injuries.

The US State Department is aware of the attack on journalist Farid, the spokesperson said, adding that “We are aware of reports of an incident.”