US deeply concerned over journalists' harassment 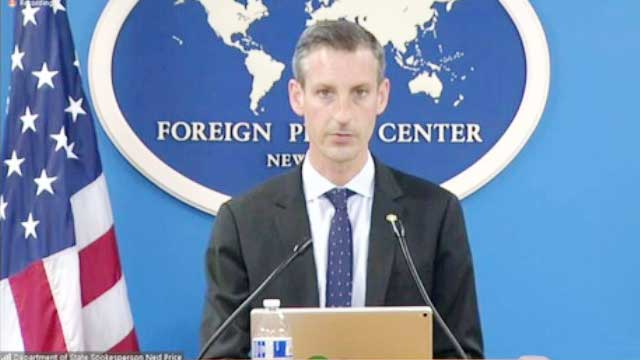 The United States has reiterated its deep concern over increasing reports of suppression and intimidation of journalists in Bangladesh, and that includes under the Digital Security Act, a law that suppresses and actually criminalizes freedom of expression. It also condemn the use of harassment or intimidation to restrict the ability of independent journalists to serve the public wherever it may occur,

The US State Department Spokesperson Ned Price expressed this concern at a briefing held at New York Foreign Press Center on Friday.

At the briefing, State Department correspondent M Mushfiqul asked, “More than 10 human rights organizations asked the U.S. and the UN for decisive action on Bangladesh authority because Bangladesh’s law enforcement agency and the government are violating human rights extremely. The extrajudicial killing is going on. And as you know, press freedom is very much controlled, and very disappointing piece of that that the Bangladesh regime organized a press conference in New York, and just one of our colleague ask a simple question: Why Bangladesh prime minister leading 141 delegation in this pandemic time where the other countries leading very small delegation? Then they attacked him brutally. He was hospitalized and released from the Elmhurst Hospital. USA is a land of free press where First Amendment is already established. But the other country where they are coming for the press briefing and they are attacking journalists, so it is very frustrating and alarming. what is your reaction to that?

And what is your reaction about the 10 human rights organizations like Human Rights Watch or Robert Kennedy Human Rights as they wrote a letter to the UN and US for decisive action for these extreme violations of human rights?”

In reply, Department of State Spokesperson Ned Price said, “I believe you and I had an opportunity to discuss this issue a couple months ago now. But we continue to be deeply concerned over increasing reports of suppression and intimidation of journalists in Bangladesh, and that includes under the Digital Security Act, a law that suppresses and actually criminalizes freedom of expression. Press freedom and access to factual and accurate information are foundational to prosperous and secure democratic societies. That is true the world over.”The Spokesperson further said, “We condemn the use of harassment or intimidation to restrict the ability of independent journalists to serve the public wherever it may occur, and we call on governments to ensure media safety and to protect journalists’ ability to do their jobs without fear of violence, threats, or unjust detention.”

“When it comes to the incident in New York City this week that you raised, we’re aware of reports of an alleged assault against a Bangladeshi journalist at an event located in New York. We would need to refer you to the New York Metropolitan Police Department for further information on that,” added Ned Price.