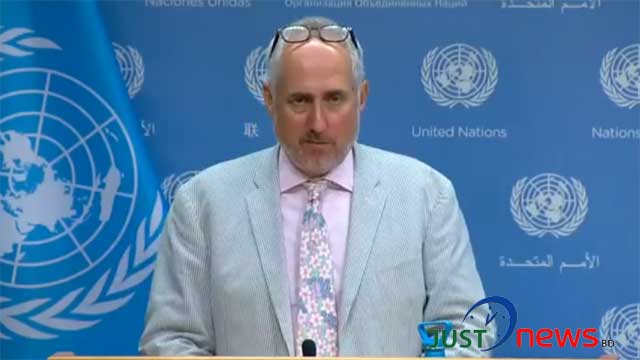 UN spokesperson Stéphane Dujarric said, they are asking for global solidarity to help those Rohingya refugees and those who wish to emigrate.

He further said, Rohingya should be granted refugee status and be resettled.

Spokesperson to the Secretary-General made this remarks at the noon briefing on Monday while replying to a query on Rohingya refugees.

In the briefing, UN Correspondent M Mushfiqul asked “The US has come one step forward to resettle Rohingya refugees in their country as we learned from the Secretary of State. Can the Secretary General urge or request other developed countries to contribute that effort as uncertainty is going deeper in Bangladesh. The country is itself in a problematic situation in terms of human rights and economic conditions.”

In reply, Stéphane Dujarric said, “Well, I mean, what we are asking for is global solidarity to help those Rohingya refugees and those who wish to emigrate and be granted refugee status and be resettled.”

On August 25, The United States secretary of state Antony Blinken said that they were working to significantly increase resettlement of Rohingya from the region, including from Bangladesh so that the persecuted Myanmar nationals could rebuild their lives in the United States.