US called for impartial and fair trial of Khaleda Zia 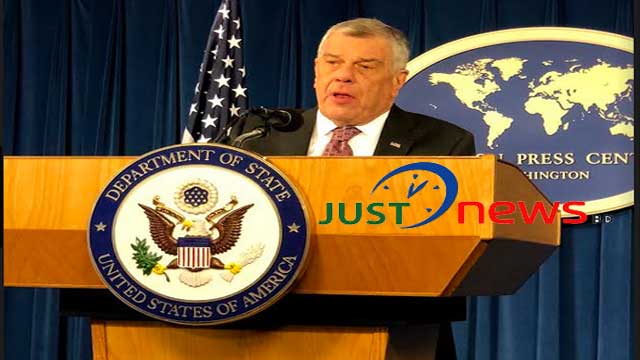 Special Correspondent from Washington, Apr 21 (Just News): Michael G. Kozak, Senior Advisor and Senior Bureau Official of Bureau of Democracy,  US Human Rights, and Labor, said the United States called for an impartial and fair trial of BNP chairperson Begum Khaleda Zia, and not just to let somebody be imprisoned for being a political opponent.

At the special briefing Bangladeshi journalist M Mushfiqul Fazal asked- According to today’s report, 160 people killed in crossfire and 118 individuals in extra – faced extrajudicial killing. And the situation is like that in Bangladesh. In terms of democracy, the report mentioned that, that there is no space for the freedom of association, particularly in main opposition, and according to your report the main opposition BNP boycotted the last parliament in 2014. And not the BNP boycotted; this was boycotted by the international community to sending observer like U.S., EU, and we have seen the statement from the State Department which was these non-participatory election, it was not in any way an election. And currently, main opposition leader, she is in the jail. So how you are assessing to the restoring democracy in Bangladesh and to stop this – the extrajudicial killing and the – in terms of democracy, restoring democracy, what is your assessment, and how you will established – as U.S. is the largest developmental partner of Bangladesh.

In reply ambassador Kozak said “Yes, well, I think you read the report well. And of course, one thing I should qualify this, is that this is a report on conditions during the last calendar year, so events that have occurred since that time are not captured in the report. They’ll be in next year’s report, and I think you had some things late in the year like the elections that were – are coming up. But we, I think, have called out for free and fair elections with international monitoring in the country. That’s one way you try to restore or promote democratic competition and openness.”

“We speak frequently with the Government of Bangladesh about how to reduce or eliminate extrajudicial killings or – it’s usually a debate about whether that’s what it is or whether it’s people killed in crossfire in a legitimate military activity. But it’s something of concern to us. We speak to people about it. Another thing that applies to Bangladesh and every other country is, if we have information that a particular unit of the security forces is engaged in abuses, we can’t train them or equip them under our law until the government brings the perpetrators of the abuse to justice. So those are just some of the tools that we – that we try to use to encourage better performance in those areas.” he added.

Ambassador Kozak said “And we’ve also, I think, called for an impartial and fair trial of Zia, and not just to let somebody be imprisoned for being a political opponent. So anyway, that’s kind of some of the things that we’re doing.”

“But as I go back to the report, it’s supposed to be describing the conditions in the – the factual conditions. What we do about that in policy terms varies from country to country, different tools we can use – statements, not providing equipment, going in and encouraging, sometimes training people so that they improve their human rights performance. So there’s a whole range of activity out there that we can and do use to try to address these kinds of problems. The report’s only about the problem, not about the solution.” he added.

In reply to an another question on Rohingya issue, ambassador Kozak said “Ambassador Brownback, has just been in Bangladesh and was out in the camps where the people from Burma are located, and I think he said this morning that the horrible conditions and the suffering that they have undergone in Burma was just breathtaking. He was very impressed in a negative way as to what had happened to them – in fact, so much so that he called the Vice President and he sent messages back to the secretary about we need to redouble our efforts on this.”

“So we accept this is a huge and serious problem. We appreciate the work that the Government of Bangladesh has been doing to try to bring some relief to these people. I think we just committed another $50 million in relief to try to help in that respect, but the long-term solution, or the real solution, is to make it possible for people to go back to their homes in a safe and secure way and where their homes are rebuilt to the point that they can live in them. As you may know, the – a lot of the villages people came from have been obliterated and there’s no place for them to go back to at this point.”he added.

“We’ve tried to let the Government of Burma know how seriously we see this. We brought economic sanctions against the senior general who commanded that region of the country, and that is a start, anyway, on letting them know that people should be held accountable for what they did. We are trying our best to get through to the government the need to be serious and to be welcoming of these people, to create a situation where they can come back and be safe and not be – not have the same cycle occur all over again.”ambassador Kozak said.

“So there’s a lot of work to be done. We know that the Government of Bangladesh has been in direct touch with the Government of Burma. We think that’s good, because there needs to be that coordination, but we’re very much on the side of trying to do everything we can to get the government to make it possible for people to come back in a safe and secure way, and in the meantime, to assist the Government of Bangladesh in the important humanitarian relief that it’s providing to the victims of this crime. And it’s a crime of ethnic cleansing, as we have made clear. This was not a chance thing. It was very deliberate and unfortunate.”said Kozak.

Lack of freedom to participate in political process

The government of Bangladesh took limited measures to investigate and prosecute cases of abuse and killing by security forces in 2017, said a US report on Human Rights Practices.

US acting secretary of State John J Sullivan at a press conference released the report.

While briefing journalists, the acting secretary condemned the brutal attacks on the Rohingya community in Myanmar. "We condemn the ethnic cleansing of Rohingya in Burma and the atrocities committed against them, and we are working with partners to address that crisis," he said.

He further said those responsible for the violations, abuses, and attacks must be held accountable.

More than 670,000 Rohingya have fled to Bangladesh in recent months. Hundreds of thousands of civilians have been internally displaced.

In the report, it was stated that public distrust of police and security services of Bangladesh deterred many from approaching government forces for assistance or to report criminal incidents.

A lack of freedom to participate in the political process; corruption; violence and discrimination based on gender, religious affiliation, caste, tribe, including indigenous persons, and sexual orientation and gender identity also persisted and, in part, due to a lack of accountability are also noted in the report.

Trafficking in persons remained a serious problem as did restrictions on worker's rights and the worst forms of child labor, the report said.

There were reports of widespread impunity for security force abuses, too.

The report in its press and media freedom section said both print and online independent media were active and expressed a wide variety of views.

However, the report says, media outlets that criticised the government have experienced a negative government pressure.

The government maintained editorial control over the Bangladesh public television station (BTV) and mandated that private channels broadcast government content at no charge.

Civil society said that political interference influenced the licensing process, since all television channel licenses granted by the government were for stations supporting the ruling party.

The constitution provides for freedom of speech, including for the press, but the government sometimes failed to respect this right, says the US report.

It said there were significant limitations on freedom of speech.

Some journalists self-censored their criticisms of the government due to harassment and fear of reprisal.