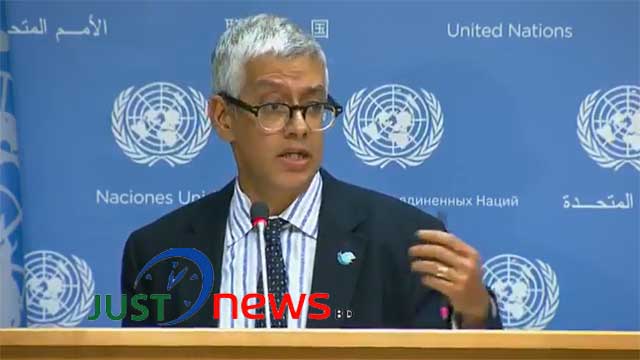 UN Correspondent from New York, Jun 1 (Just News): Farhan Haq, Deputy Spokesman for the Secretary-General, said UN Office on Drugs and Crime (UNODC) is aware of the questions that have arisen in the context of the recent activities in Bangladesh.

He came up with this comment in reply to a question on anti-drugs crackdown and extrajudicial killing in Bangladesh at the noon briefing today.

UN Correspondent M Mushfiqul Fazal raised the question at briefing held at UN headquarter in New York on Friday. Arrest of BNP chief Khaleda Zia, bail scrapped and inhuman situation of her imprisonment were also raised by the journalist.

Reiterating United Nations previous stance and concern over Khaleda Zia issue the spokesman said “I don't have anything particularly new to say, beyond the concerns we had expressed in the past about this process.”

In briefing Mushfiqul asked, “As I asked to Stéphane [Dujarric] yesterday, I told Stéphane that in Bangladesh, the extrajudicial killing is going on. Within 16 days, 125 people face extrajudicial killing by the law enforcement agency in Bangladesh in the name of drug control, one. And second question was… he said he will update me by tomorrow. And second question was the main opposition leader, Begum [Khaleda] Zia, is in prison and she's facing very inhuman situation, lack of electricity and providing low-quality food. Though she got the bail from the… for her controversial verdict, but she is not released from the courts because they filed new cases, so what is your observation on these two particular issues?”

In reply the Deputy Spokesman said, “Well, regarding your second question, I don't have anything particularly new to say, beyond the concerns we had expressed in the past about this process.”

Farhan Haq said, “Regarding your initial question, the UN Office on Drugs and Crime (UNODC) is aware of the questions that have arisen in the context of the recent activities in Bangladesh. What I can say is the UN Office on Drugs and Crime urges all Member States to adhere to their commitments to promote balanced human rights-based approaches to drug control, in line with the three international drug control conventions and the outcome document of the United Nations General Assembly special session on the world drug problem. UNODC stands ready to engage with all countries to help bring criminals to justice with appropriate legal safeguards, in line with international standards and norms, and to promote evidence-based prevention, treatment, rehabilitation, and reintegration.”