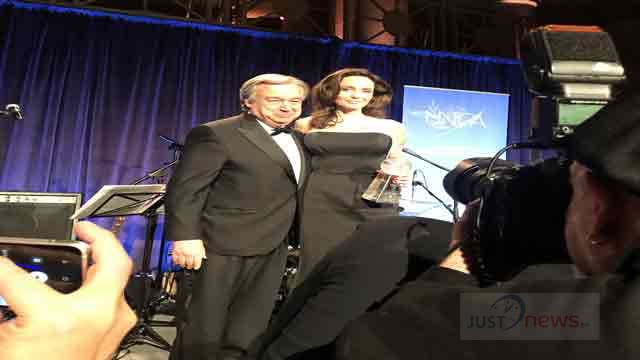 The UN chief in his remarks said a free press is crucial for peace, prosperity and human rights for all. Reporters, photographers and other media workers give voice to the voiceless, shine a light on global challenges and tell the stories that need to be told. Their words and pictures regularly change our world for the better.

Guterres said journalist often face harassment and grave risks while carrying out their work. Attacks against journalists are attacks against our common values. Infringement on their fundamental freedoms harm us all, he added.


Angelina Jolie, recipient of the 2017 UNCA Global Citizen of the Year, also made an emotional speech to the audience, and all of them listened her words with pin drop silence. Ongoing humanitarian crisis of Myanmar, Syria and Yemen were also highlighted in her speech, and there was a vow for establishing human rights safeguard and freedom of press around the world.

UNCA President Sherwin Bryce-Pease made the welcome address at the beginning of the ceremony and welcomed all the participants.

Al Jazeera English reporter James Bays announced the name of winners of the 22nd Annual UNCA Awards-2017 and called them to the stage to receive their awards.