Nobody asked us to act as meditate to solve this: Russian FM on Rohingya crisis 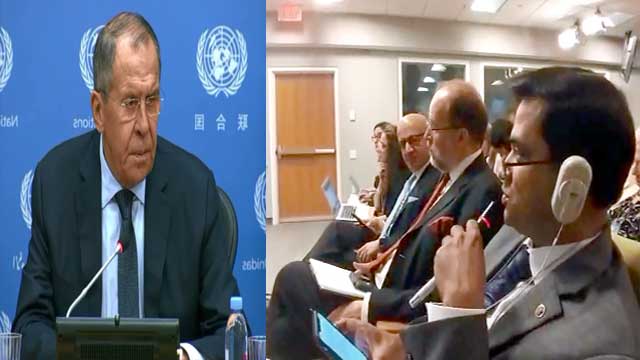 Russian Foreign Minister Sergey Lavrov has said nobody asked them to meditate on Rohingya issue to solve the crisis.

“Rohingya crisis is not an issue that can be resolved all of a sudden. Nobody asked us to act as meditate to solve this,” said the Minister.

The Russian Foreign Minister came up with this comment in reply to a question by Bangladeshi journalist M Mushfiqul Fazal at the UN headquarter, New York on Friday.

Sergey Lavrov asked all parties concerned to sit for dialogue to solve the crisis.

Drawing attention on the ongoing Rohingya crisis UN Correspondent Mushfiqul asked, “Bangladesh in difficult situations with millions of Rohingyas. The country itself in problematic situation in terms of economic, social and democratic rights. Can you meditate with the both the authorities to send them (Rohingya) back with proper dignity as both authoritarian regimes are close allies of Russia?”

In reply Russian Foreign Minister said, “This is not an issue that can be resolved all of a sudden. Just a frustration begins to act as meditate; nobody asked us for it.”

He further added, “There were general understandings as the result of the UNSC discussion, including the return of people. For this, there need to provide certain conditions. In this respect you should work with UN agency for refugees, have a dialogue on technical issues including the places where refugees could go back to and guaranteeing their security and safety- that basically all.”

Russian Foreign Minister said, “And just like any other case it caused for the come out of trust fall, bilateral works to publicly increased attention to it. Those attempts often have increased nature. They just make fewer regimes for both sides dialogue. Dialogue, dialogue and once again dialogue, there is no magical secret performed as I mentioned here.”