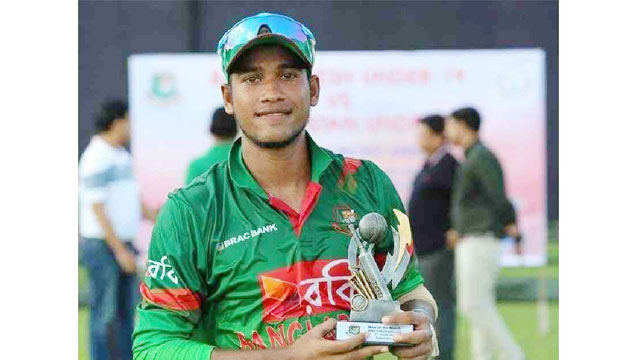 Kazi Anik Islam, a first class cricketer who had represented Bangladesh in the ICC U-19 World Cup' 2018, has tested positive for a prohibited substance and accepted a sanction of two years suspension for his first doping offence.

The player tested positive for Methamphetamine (d-) during an in-competition test conducted in November 6 in 2018 in Cox’s Bazar.

He admitted the offence and accepted a two-year suspension for an anti-doping rule violation involving his use of prohibited substance, said a BCB media release Sunday night.

Pacer Kazi Anik took prohibited drug during a National Cricket League match for Dhaka Metro in November 2018 in Cox,s Bazar. Later, he was found positive in doping test and was suspended provisionally from February 2019.

Kazi Anik will therefore be re-eligible to participate in cricket and cricket activities at midnight on February 7, 2021 as his suspension have already started from February 8, 2019.

Taking into account Articles 10.10.1, 10.10.2, 10.10.3 of the BCB Anti-Doping Code, and the fact that this is the player’s first anti-doping rule violation, the two-year period of ineligibility will commence on February 8, 2019, the day of formal notification of the player’s adverse analytical finding and the day upon which he accepted a provisional suspension.

According to the BCB Anti-Doping Code (Article 9 and 10.8), all individual results of the athlete obtained from November 6, 2018, day of sample collection, shall be disqualified. This includes the forfeit of any medals, points and prizes.

This ruling is in accordance with the BCB Anti-Doping Code. As a signatory of the ICC Anti-Doping code, BCB remains committed to a doping free sporting environment at all levels, to prevent, in the spirit of fair play, doping in sport for cricketers and in conformity with the general principles of the World Anti-Doping Code.