Fizz bags his second as play resumes after rain interruption 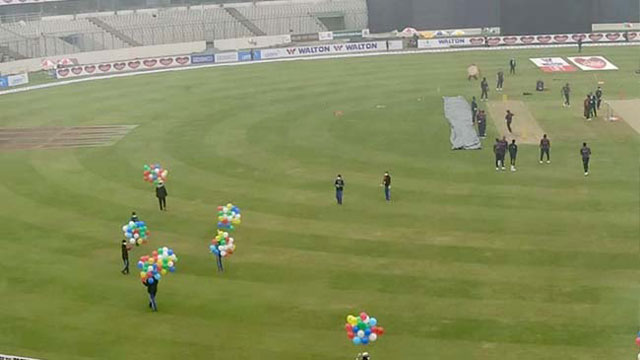 Play has restarted after rain and McCarthy luckily survived the second ball after restart as a thick outside edge went for four. More than an hour has been lost due to rain

Update 12:45 pm: There was a bit more shower but the rain has now stopped and the covers are completely off. The match is set to restart in a few minutes.

Update 12:13 pm: Rain has well and truly stopped. The covers are coming off as the groundsmen prepare for play to restart once again.

Mustafizur Rahman bagged the wicket of West Indies opener Sunil Ambris in just the second over of the innings with a full-length delivery that shaped back in before rain stopped play at the Sher-e-Bangla National Cricket Stadium today.

Bangladesh's newly appointed captain Tamim Iqbal has won the toss and elected to bowl against the West Indies in the first ODI at Mirpur today.

The series paves the way for Bangladesh's international return after a hiatus since March last year when cricket was stalled due to the coronavirus pandemic.

It is a new beginning for Bangladesh in this new year with Tamim Iqbal being appointed ODI captain. It will be Tamim's first assignment since he replaced Mashrafe Bin Mortaza as captain. The series will also be a new beginning for ace all-rounder Shakib Al Hasan, who will return to the national duty after serving a one-year ban from ICC for failing to report corrupt approaches. Shakib however did not miss much action as the pandemic seized many international series for the Tigers.

Record bacons both left-handers too in today's game. Shakib is set to feature in his 100th ODI game in Bangladesh and can reach a landmark of 150 wickets alone at home soil. The newly-appointed skipper Tamim would need 67 runs to reach the mark of 1000 runs against the Windies -- a feat which will see him become the first Bangladesh batsman to do so.