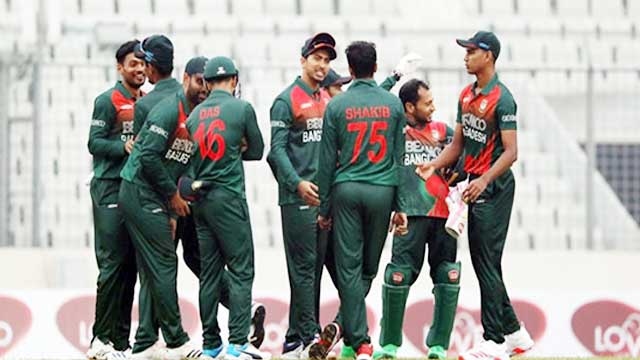 Skipper Tamim Iqbal made highest 44 after Shakib Al Hasan starred with ball in his international comeback as Bangladesh beat West Indies by six wickets in the first one-day international in Dhaka on Wednesday.

In his first international match after one-year ban, Shakib picked up 4-8 as Bangladesh bowled out West Indies for 122 in 32.2 over.

But the batsmen struggled to chase the small target against an inexperienced bowling of West Indies, especially the left arm spinner Akeal Hosain, who took 3 wickets from his 10 overs for only 26 runs.

Tamim, on his debut as regular captain played a patient innings from 69 balls while Shakib and Liton Das added 19 and 14 runs respectively.

Mushfiqur Rahim and Mahmudullah were unbeaten on 19 and nine runs respectively to take the Tigers to winning shore without further embarrassment.

Earlier, debutant Hasan Mahmud grabbed 3-28 and Mustafizur Rahman picked up 2-20 to complement Shakib with the ball.

Mustafiz drew the first blood in the very second over of the match by trapping Sunil Ambris leg-before after Bangladesh skipper Tamim Iqbal won the toss opted to bowl first in an overcast condition.

Rain interrupted the match but after the resumption it was Shakib who wreaked havoc in the Caribbean batting line-up by picking the wickets of Andre McCarthy (12), Jason Mohammad (17) and Nkrumah Booner (0).

Hasan, who made his ODI debut, dismissed dangerous-looking Rovman Powell (28) and claimed the wicket of Reyman Reifer in the next ball by trapping him LBW.

Kyle Mayers (40) was going against the flow and scored some quick runs with flamboyant shots but ended up giving a catch to Liton Das at the first slip against the bowling of Mahidy Hasan.

Shakib wrapped the visitors’ innings by dismissing Alzari Joseph and finished with an impressive bowling figure of 7.2-2-8-4.