Mehidy grabs four as Bangladesh bowl out Windies for 148 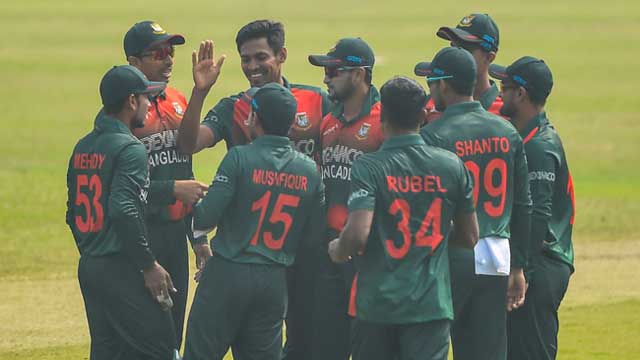 Mustafiz gave Bangladesh an early breakthrough by removing Sunil Ambris for six with Mehidy taking the catch at point in the fifth over.

Mehidy led the attack by removing Ottley for 24 and Joshua Da Silva for five in the same over before Shakib joined the party.

Shakib removed Andre McCarthy for only three runs and West Indies were soon reduced to 41-5 with the run out of Kyle Mayers, the highest scorer in the previous match, who was out for a duck.

West Indies skipper Jason Mohammed’s struggle also came to an end when he was struck leg before wicket by Shakib for 11.

The batsman went for a review but the decision stayed as the ball was about to hit the timber.

Hasan Mahmud bowled Nkrumah Bonner for 20 as the visitors continued to struggle against Bangladesh’s pace and spin.

Mustafiz, who was almost unplayable in his opening spell giving away just two runs in four overs, ended their resistance by removing Joseph for 17.

Mehidy stumped out Powell for 41 runs to wrap-up West Indies innings and finish with a figure of 4-25, his career best bowling figure.