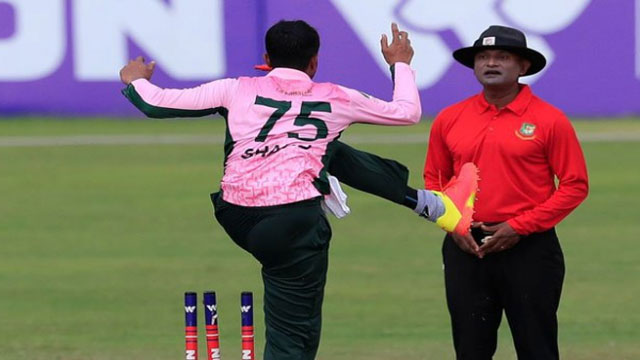 In a breach of the BCB Code of Conduct, Shakib Al Hasan has been banned for three matches and fined BDT 500,000 for losing his temper during a Bangabandhu Dhaka Premier Division T20 League game on Friday, informed Kazi Inam, chairman of Cricket Committee of Dhaka Metropolis (CCDM) today.

Shakib, skipper of Mohammedan Sporting Club, kicked the stumps out of rage after umpire Imran Parvez denied an LBW appeal in the fifth over of their game against Abahani. He was also seen threatening the umpire and also uprooted the stumps and slammed it in a fit of rage when the umpires called for covers to be brought on due to rain.

Shakib was also seen exchanging some heated words with Abahani staff and with their coach Khaled Mahmud in particular before the all-rounder was dragged away to the dressing room by his teammates. Later, however, the misunderstanding between Shakib and Mahmud seemingly came to an end.