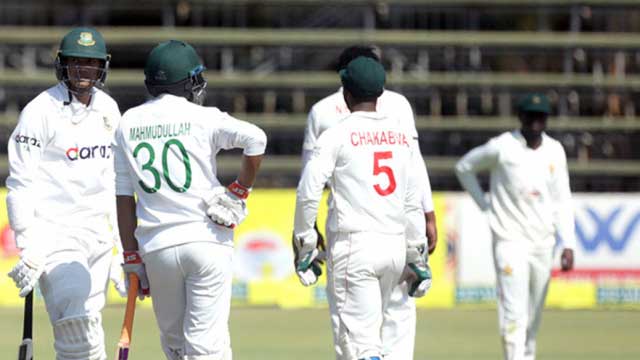 Mahmudullah remained unbeaten on 150 while Taskin Ahmed’s heroics ended on 75 as Bangladesh’s first innings folded on 468 at the cusp of Tea break on the second day of the one-off Test at the Harare Sports Club Ground on Thursday.

Mahmullah and Taskin’s partnership ended on 191, the highest ninth wicket stand for a Bangladeshi pair in Tests, after the latter tried to hoick off-spinner Milton Shimbu but missed the ball completely and it crashed into his stumps.

Mahmudullah then completed his 150, his career best score in Tests, before Ebadot Hossain edged a ball off Blessing Muzarabani, who finished with 4-94, and departed for a duck.

This is Bangladesh’s highest team total in Tests against the hosts in Zimbabwe, the previous highest being 457 in Bulawayo in 2001.

Earlier on day one, Liton Das hit 95 late on the day after skipper Mominul Haque made 70 to take the score to 270-8 at stumps after the visitors had opted to bat first.