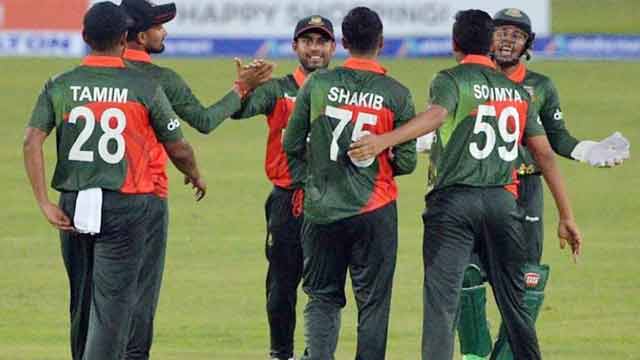 A five-wicket haul from Shakib Al Hasan after a brilliant century from Liton Das took the Tigers to a comfortable 155-run win over Zimbabwe in the first one-day international at the Harare Sports Club Ground on Friday.

Liton made 102 off 114 balls, his first 50-plus knock in the format since his 176-run innings against the same opponents in 2020 in Sylhet, while Afif Hossain and Mahmudullah chipped in with 45 and 33 respectively to take Bangladesh to 276-9 after a rocky start.

Shakib claimed 5-30 in 9.5 overs, which took his wicket-tally in ODIs to 274 and made him the most successful bowler for Bangladesh in the format, to help Bangladesh ransack Zimbabwe for 121 in 28.5 overs.

Regis Chakabva was the only Zimbabwean batsman to show some fight, playing a counter-attacking 54 off 51 balls, but his efforts only lessened the margin of defeat.

With the win, Bangladesh took a 1-0 lead in the three-match series and extended their winning streak against Zimbabwe in ODIs to 17.

Sent to bat, Bangladesh made the worst possible start to their innings as they lost skipper Tamim Iqbal in the third over off Blessing Muzarabani without any runs on the board.

Shakib, who has been searching for form lately, fell for only 19 and Mohammad Mithun (19) and Mosaddek Hossain (five) also failed to stand-up in the absence of Mushfiqur Rahim in the middle order and left the tourists stranded on 74-4 in 18.4 overs.

Liton was then joined by the experienced Mahmudullah and together they guarded their wickets and kept the scoreboard ticking on a pitch that was assisting the pace bowlers.

Mahmudullah (33) gave a catch to a slower bouncer off Luke Jongwe not before forming a 91-run partnership with Liton, which set up the launching base for the Tigers.

Liton then formed another good partnership with Afif to push the score over 200 and along the way he also completed his fourth ODI ton with the help of eight boundaries.

Liton, however, couldn’t hang around much longer as his pull off Richard Ngarava went straight into the hands of Wellington in the boundary.

Afif and Mehidy Hasan (26) then gave the innings the much needed impetus in the final overs by adding 58 runs off 42 balls.

Mehidy and Afif departed in consecutive deliveries from Jongwe but the pair had already done enough to ensure Bangladesh posted on a strong total, which proved to be too much for the hosts.

Zimbabwe also got off to a tumultuous start as they lost three wickets inside the first 10 overs with Bangladesh’s pace trio of Mohammad Saifuddin, Taskin Ahmed and Shoriful Islam picking one wicket each.

Then began the Shakib show, as the left-arm spinner dismissed Brendan Taylor (24), Ryan Burl (six), Muzarabani (two), Regis Chakabva (54) and Ngarava (0) in a 7.5-over spell to wrap up the Zimbabwe innings with over 21 overs remaining.

Shakib began the match with 269 wickets, one behind former skipper Mashrafe Bin Mortaza, but now leads the former skipper in the wickets tally by four wickets.

Liton, who didn’t keep the wickets due to a groin injury and Nurul Hasan stood in for him, was awarded the player of the match award for his brilliant innings.

The second match will take place on Sunday at the same venue.