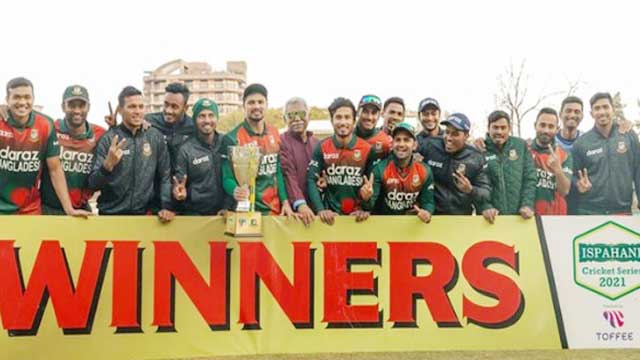 Bangladesh have won the third ODI by five wickets against hosts Zimbabwe and complete the 3-0 series sweep at Harare Sports Club Ground in Harare on Tuesday.

Chaing to 298 to win Tamim Iqbal has scored his 14th ODI century (112) before getting out during the 35th over of the innings.

Nurul Hasan Sohan was unbeaten on 45 while Afif Hossian was not out on 26 when Bangladesh reached their target with 12 balls to spare.

Openers Tamim and Liton Das laid a solid foundation with a 88-run partnership while chasing 298 runs set by Zimbabwe. Liton left the crease after scoring 32 runs before Shakib al Hasan got out after contributing 30.

Earlier, Zimbabwe scored 298 runs before getting all out in 49.3 overs. Opener Regis Chakabva scored 84 runs while Sikandar Raza (57) and Ryan Burl (59) both made half centuries to push the Zimbabwe total close to 300 marks. Bangladesh pacers Mohammad Saifuddin and Mustafizur Rahman took 3 wickets each at the end of the first innings.