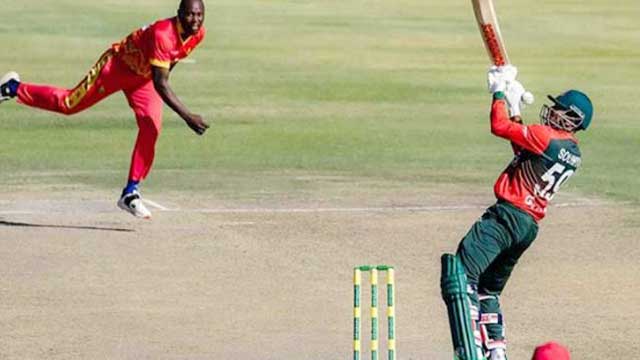 A quickfire innings from Shamim Hossain after Soumya Sarkar’s half-century took Bangladesh to a series clinching five-wicket win over Zimbabwe in the third Twenty20 at the Harare Sports Club Ground on Sunday.

Soumya was also Bangladesh’s best performer with the ball, finishing with 2-19 in his three overs.

Chasing a daunting target, Bangladesh lost opener Mohammad Naim (three) cheaply and Shakib Al Hasan also departed for 25 off 13 balls but thanks to Soumya’s controlled aggression on the other end the Tigers’ maintained a healthy run rate.

Soumya anchored the innings till the 14th over, forming a 63-run third wicket stand off 35 balls, before handing a simple catch at long on off Luke Jongwe.

Skipper Mahmudullah, who finished on 34 off 28 balls, didn’t look at his fluent best throughout the innings and the momentum was at risk of getting halted after Soumya’s dismissal.

But Afif Hossain then struck a short-lived 14 off five balls to keep the required rate in check before getting bowled behind his legs by Wellington Masakadza.

Bangladesh still needed 44 runs from 26 balls when Shamim, playing in his second international match, came to the middle.

The Under-19 World Cup winner was unfazed by the situation as he struck six fours all around the ground and brought the target well within the Tigers’ reach.

Mahmudullah departed in the penultimate over with seven runs still required but Shamim struck a fierce four in the first ball of the 20th to dispel any fear of a late twist and took a single in the next ball to finish the job.

Mahmudullah was happy that his young team completed the stiff chase in the absence of Tamim Iqbal and Mushfiqur Rahim.

‘The boys showed their character, everybody contributed. In the end Shamim played a crucial knock and all in all it was a good show by the batting unit,’ Mahmudullah said in the post-match presentation ceremony.

Earlier, opener Madhevere formed a brisk 63 and 59-run partnerships for the first two wickets with Tadiwanashe Marumani (27) and Chakabva to take Zimbabwe to 122-1 after 11 overs.

Soumya then dismissed Chakabva thanks to a joint effort from Naim and Shamim, with the former parrying the ball at the edge of the ropes and the latter completing the catch.

Just four balls later, Soumya rattled the stumps of skipper Sikandar Raza (0) to reduce them to 125-3 in 11.5 overs.

But Burl’s brisk innings, which included three fours and two sixes, took them to their highest total in T20s against Bangladesh, which proved insufficient in the end.

Bangladesh had earlier won the first T20 by five wickets and lost the second match by 23 runs.