Shakib could replace Mominul as captain 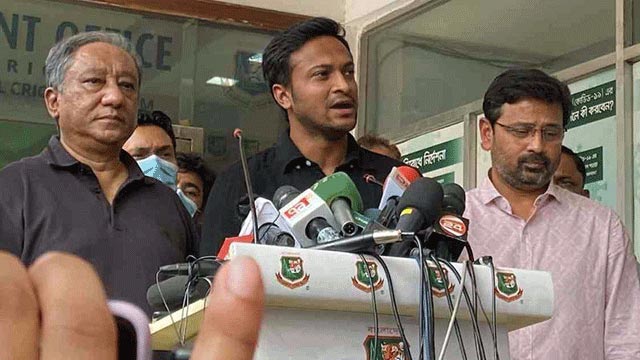 The team’s recent bad performances in Tests under Mominul’s leadership have raised questions over his captaincy. Furthermore, the pressure of captaincy is also affecting his batting.

Bangladesh Cricket Board (BCB) has already conveyed to Mominul that they want to see him become consistent with the bat once again and have asked him to rethink if he wants to continue as captain.

The BCB, however, is leaving the decision up to Mominul as they have named him as the skipper for Bangladesh’s forthcoming tour to the West Indies. Mominul will sit in a meeting with BCB president Nazmul Hasan before the team leaves for the Caribbean islands. In that meeting, Mominul will say if he wants to continue as captain or let go of the leadership duty.

If he decided to quit the role, Shakib will be named captain in the red-ball format. The all-rounder has reportedly had preliminary talks with the board about returning as captain and has agreed to reprise the role.

If Mominul decides to carry on as captain, the West Indies tour will be the “lifeline” of his captaincy tenure. If Mominul performs well as a leader and a batsman, his captaincy would continue. Otherwise, the board is likely to take matters into their own hands and remove him from captaincy.

Mominul already had a discussion with the BCB president after the Sri Lanka series, where the left-handed batsman said that he feels the pressure of captaincy is taking a toll on his batting. After that meeting, the BCB sent the ball to Mominul’s court and told him to decide about his future as captain.

BCB cricket operations chairman Jalal Yunus also hinted the same to the reporters on Monday, “Captaincy is definitely an extra pressure (for Mominul). Maybe he is finding it difficult to inspire others when he himself is not scoring. Not scoring runs could also have a negative impact on him mentally. That could possibly affect his batting. He will decide what would be best for him.”

His Test batting average has been on a downward trajectory since he became the captain. As captain, in 17 Tests Mominul has scored only 912 runs at an average of 32.44. Under his leadership, Bangladesh has won three Tests, drawn two and lost 12.

Mominul is trying to return to form. Soon after the Sri Lanka series, Mominul returned to the training ground. On Monday, he had a 90-minute-long indoor net session supervised by BKSP’s cricket advisor and coach Nazmul Abedin Fahim.

Mominul took over as captain from Shakib in 2019 after the all-rounder got banned for one year for keeping contacts with bookmakers. Mominul was made captain a day before Bangladesh was set to fly to India to play their second ever Test series against the Asian rivals.

Shakib has captained Bangladesh in 14 Tests, where the Tigers have won thrice and lost 11 times.

Shakib became Bangladesh’s captain for the first time in 2009 after skipper Mashrafe Bin Mortaza suffered an injury while bowling in a Test in West Indies. Shakib’s first tenure as captain ended in 2011.

His second tenure as captain began with a tour to the Caribbean islands in 2018. Now the all-rounder could become Bangladesh’s captain for the third time in the same place. But it all depends on what Mominul decides.