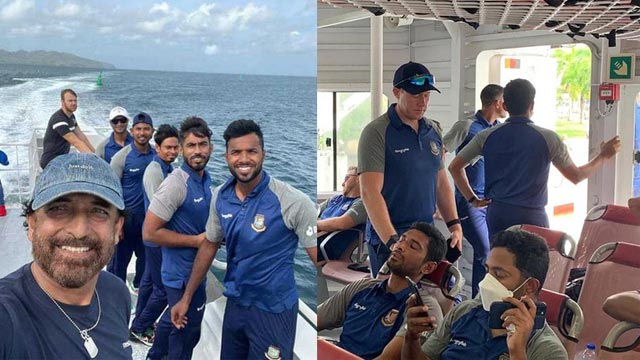 Saint Lucia to Dominica, via Martinique. After a tumultuous sea voyage the Bangladesh team reached the island of Dominica at Thursday noon, local time. They will only get one day’s break before the Twenty20 series begins at the Windsor Park in Dominique. The biggest worry right now is can the players recover from the effects of the sea journey in just one day.

The ferry from Pearl Express started for Martinique from the Castries Ferry Terminal in Saint Lucia at 7:00am on Thursday. This ferry regularly operates from Saint Lucia to Dominica and a few other islands via Martinique.

The Bangladesh cricketers were anxious about this sea voyage from the beginning. None of them had experienced a five-hour-long sea journey before. There were rough waves due to the cyclone that happened just two days back. All in all, it was a horrendous experience for the cricketers.

The waves started as soon as the ferry reached mid sea. The ferry wasn’t big , so six to seven feet high waves were enough to make it go rock wildly. The waves felt the most fierce while crossing the dolphin channel.

To regular sea travellers, all this was perhaps quite normal. But for first-time travellers, this was definitely not a pleasant experience. In sea voyages, the two biggest fears are facing rough seas at the middle of the ocean and getting ‘motion sickness’. In the case of the Bangladesh team, both came true.

When the ferry started its engine and the journey began, everyone on board cheered. Players gathered on the deck of the ferry to click selfies and make videos of the blue ocean on their smartphones. Other than the Bangladesh team, West Indies cricketers, commentators, journalists and some other passengers were on the ferry. All in all, the journey started like it was a sea cruise.

But when big waves started to violently rock the ferry, the cricketers started falling victim to ‘sea sickness’ one after the other. Almost everyone was completely exhausted in the one and a half hour journey from Saint Lucia to Martinique. The worst affected were pacer Shoriful Islam, wicketkeeper-batsman Nurul Hasan and manager Nafees Iqbal. The others also got worried seeing their condition.

Nafees and Nurul recovered a little in the 40-minute break in Martinique but Shoriful again got sick in the journey from Martinique to Dominica. He vomited multiple times in polythene bags. At one point, he even took off his shirt to calm down.

The team’s masseuse Sohel started vomiting and fell ill as soon as the voyage began. Tired, he went to sleep at the ferry deck and woke up after the ferry reached Dominica. Many of the others in the team suffered ‘motion sickness’. They were also scared and anxious.

None of the Bangladesh cricketers had experience of crossing the sea like this. Other visiting teams also don’t travel from one island to the other on a sea vessel when they tour West Indies. Even the West Indies team has never before travelled to another island on a ferry for an international match. Players from the home team were also in distress. Caribbean commentator Curtly Ambrose didn’t even join fellow commentators Athar Ali Khan, Ian Bishop on this journey.

The host board draws out the plan for a bilateral series. But it gets finalised after the board of the touring country approves it. Keeping the safety of the players in mind, the board had the option of disapproving Cricket West Indies’ proposal to travel on a ferry and instead propose air travel. Why didn’t the board do that and instead agreed to the ferry journey, many disgruntled cricketers asked this question.

One cricketer said, “We are the ones who can fall sick and die here, us, nothing will happen to them.” One of the team’s senior cricketers said, “I have toured many countries, this is the first time I am experiencing something like this. None of us are used to this. Forget about playing, what will happen if one of us gets seriously ill in the ferry. This is the worst tour of my life.”

Before the ferry reached Martinique, the cricketers were telling manager Nafees Iqbal that they will get off in Martinique. They told him to speak with the board to make arrangements for a flight to Dominica from Martiniqe. Twenty20 side’s captain Mahmudullah tried to contact BCB president Nazmul Hassan on WhatsApp multiple times but couldn’t get through.

Later, Nafees Iqbal contacted BCB chief executive officer Nizam Uddin Chowdhury and told him what was happening. But it wasn’t possible to make other arrangements in such short notice. It impossible to arrange air tickets for the entire Bangladesh contingent and there was no possibility of getting visa on arrival at the French colony Martinique.

The cricketers also understood the reality. But many of them suffering ‘sea sickness’ despite taking tablets beforehand and a journey on, as sailors call it, rough sea made it a frightening experience.

One-Day International skipper Tamim Iqbal wasn’t part of the ferry voyage. He had informed beforehand that he won’t travel to Dominica on a ferry due to sea phobia. However, as Tamim is not part of the T20 squad, it wasn’t compulsory for him to travel to Dominica. He is expected to join the team in Guyana before the ODI series.