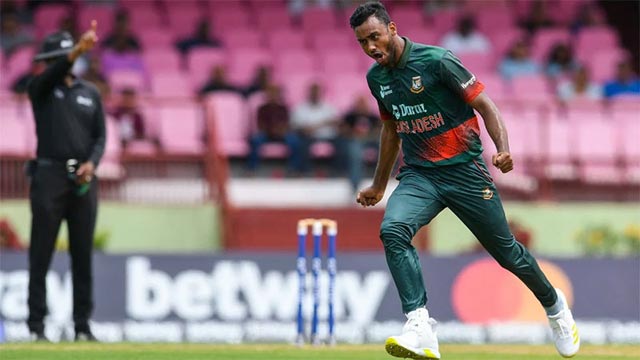 Bangladesh defeated the West Indies by six wickets in the rain-affected first One-Day International of a three-match series at the Guyana National Stadium on Sunday.

Bangladesh limited the West Indies to 149 for nine in the ODI and won the match by securing 151 for four off 31.5 overs.

Earlier, Shoriful Islam’s best figures limited the West Indies to 149 for nine batting first against Bangladesh in the rain-affected opening one-day International of a three-match series at the Guyana National Stadium in Sunday.

In a match reduced to 41 overs per side due to a delayed start caused by heavy overnight showers, Shoriful’s haul of four for 34 with his left-arm seamers ensured the home side were never able to properly recover from early setbacks on a pitch which made free scoring difficult.

Spinner Mehidy Hasan Miraz played his part in a disciplined bowling effort with three wickets, including West Indies captain Nicholas Pooran, while senior pacer Mustafizur Rahman set the tone for the match when he dismissed prolific opener Shai Hope for a first ball ‘duck’ after Bangladesh captain Tamim Iqbal put the home side in to bat.

Shamarh Brooks topscored with 33 with the next best effort being an unbeaten 19 from Anderson Phillip in an unbroken last-wicket partnership of 39 with Jayden Seales (16 not out).

Shoriful went one better than Mustafizur in taking the wickets of Brandon King and Brooks in his opening over before adding the Guyanese pair of all-rounder Romario Shepherd and spinner Gudakesh Motie.

However the coveted fifth wicket of the innings for him proved elusive as Bangladesh’s fielders dropped three catches to extend the last-wicket resistance of Phillip and Seales.