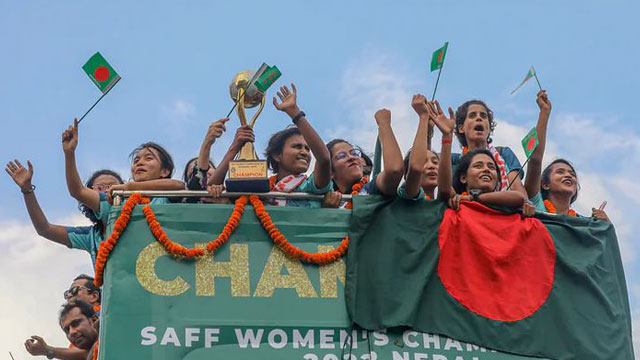 The victorious Bangladesh National women’s football team got a grand reception, along with a victory parade upon returning home from Nepal on Wednesday afternoon after their triumph in the SAFF Women’s Football Championship with a perfect record.

The glorious parade that was arranged to celebrate their maiden SAFF Championship crown was perfectly fitting for the glory they brought to the country.

An elegantly decorated open-deck BRTC bus was arranged by the Bangladesh Road Transport Corporation and Bangladesh Football Federation for their victory parade through the streets of the capital.

Awaiting their arrival, thousands of fans flocked to the Hazrat Shahjalal International Airport so that they could welcome and celebrate the national hero’s for their historic and glorious achievement.

When the champions boarded the plane that would carry them back home, the pilot congratulated the entire team in a welcoming address, while the cabin crew, staff, and other passengers greeted the girls with a celebratory attitude before takeoff.

The ministry for youth and sports organised the initial welcome for the team at the VIP lounge after the team’s landing.

The long wait was finally over when captain Sabina Khatun entered the VIP lounge with the dream trophy, and the rest of the players and coaching staff followed her one by one.

The scheduled press conference in the VIP lounge was interrupted due to the commotion caused by media representatives and internet bloggers, and the ministry complied with the airport authority’s request to temporarily suspend it.

However, the press conference took place after hours, away from the VIP area.

At around 2:00pm, the golden girls were greeted by Zahid Ahsan Russel, the state minister for youth and sports, who presented them with treats and floral garlands.

Sabina addressed the people of Bangladesh to express gratitude for their grand reception. Then she dedicated the trophy to the nation.

‘This trophy belongs to the 18 crore people of this country. This grand reception got us overwhelmed. Thank you all for welcoming us with such delight. We are grateful!,’ said the Bangladesh captain in her immediate reaction.

But the true frenzy began when the group boarded the lavishly-decorated open-top BRTC bus to travel to the BFF House in Motijheel.

People in the city spontaneously gathered along the side of the road at various locations to cheer on the victorious girls during their victory parade.

The parade fleet included band party cars, media cars, and the center of attention, the open-deck bus, which had a stereo system.

The motorcade drove on to its destination under police protection. The common folk flocked in large numbers anywhere they might catch a glimpse of their heroes.

When the team’s fleet passed through Kakoli, Jahangir Gate, PMO, Tejgaon, Mouchak, and Kakrail on its route to Motijheel, fans waved flags, posters, and banners to show their support.

People from all walks of life gathered around the parade with a single aim, which was to celebrate the champions to the fullest. With an unprecedented ecstasy and tears of joy, citizens of the capital kept on cheering the girls who had brought in a rare glory for the country, a glory that the people of this country badly needed in these trying times.

People of this country couldn’t be any more thankful for the triumph of the Bangladesh women’s football team, which they achieved against so many odds, both visible and abstract.

However, the parade wasn’t entirely pleasant, as Ritu Parna Chakma, one of the fan favourites, hurt her head in a collision with an overhead banner.

According to a Bangladesh Football Federation official, she needed three stitches on her head.

The fleet travelled roughly 20km from the airport to the BFF house, in around four hours. The city’s traffic control board and law enforcement had to expend a lot of effort in clearing the path for the convoy.

Another reception awaited the girls at the BFF. The BFF president, Kazi Salahuddin received the SAFF champions there.

At the BFF, a press conference was arranged where the women’s wing chairman and FIFA council member, Mahfuza Akhter Kiron, said, ‘We started a journey in 2012 with women’s football. This success is the pay-off of that rigorous path, which we passed through long-term plans and intensive training.’

The triumphant coach of the team, Golam Robbani Choton, also talked at the press conference about the struggles they all had to endure.

‘When people asked why women’s football is experiencing success only at age levels and not at the national level, we didn’t have an answer. We

could only ask to wait till 2024, as we had a vision for our journey and the desire to win this title by 2024.

‘We thought we would reach the final this time but wouldn’t be able to win all the way through. But against all odds, we did it two years earlier,’ Choton concluded.

Now it’s time for celebration for the whole country, as well as the golden girls themselves. It’s time to acknowledge what these girls have done for the sports arena of this country and to bring a breeze of euphoria to the people of this country, and that too by enduring a difficult path.