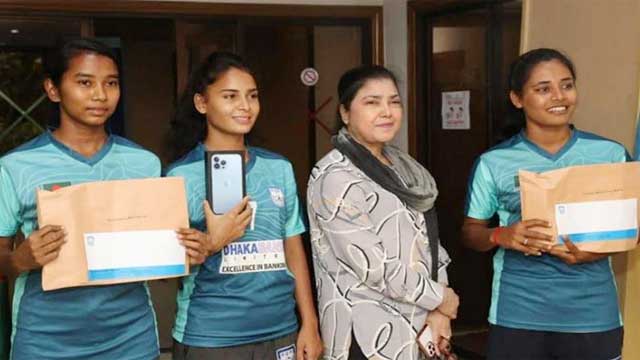 Chairman of the BFF Women's Football committee and FIFA Council member Mahfuza Akhter Kiron today (Saturday) compensated the three footballers of the SAFF Women's Champions team who lost money on their arrival from Kathmandu to Dhaka on Thursday.

After getting a grand reception at the airport and joining the parade in the open deck double decker bus from airport to BFF office in Motijheel, three Bangladeshi footballers--Krishna Rani Sarkar, Shamsun Nahar Sr and Sanjida Akhter – found their money stolen from their luggage.

Their bags were found unlocked and some of their dollars missing. Krishna lost US dollars 900 and cash Tk 50,000 that included a part of Sanjinda while Shamsunahar lost 400 US dollars, who saved it for buying an IPhone and others.

It was not sure from where the money was lost.

Mahfuza Akhter Kiron reimbursed the money from her personal fund to the players not from BFF fund, BFF President Kazi Salahuddin disclosed this to the media after a meeting of the professional league committee on Saturday.

It was reported that Sanjida got an IPhone. The three players also received additional Tk 50,000 each.