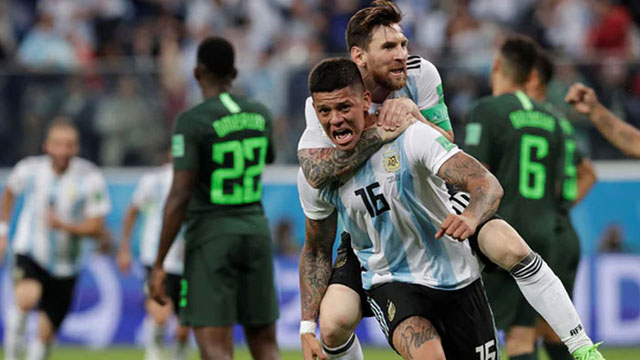 Dhaka, June 27 (JustNews) : A late goal by Marcos Rojo gave Argentina a dramatic 2-1 victory over Nigeria in Group D and sent the two-time champions through to the knockout stages of the World Cup.

Lionel Messi scored his first goal of the tournament in the 14th minute with an expertly taken shot. However, Nigeria were level six minutes after the restart, when Javier Mascherano fouled Leon Balogun in the area and Victor Moses stepped up to slot the resulting penalty past Franco Armani.

With the game ebbing away from Argentina, Gabriel Mercado crossed from the right in the 86th minute and Rojo turned the ball into the goal with a first time strike to spark wild celebrations from the Argentines.

Argentina face France in the last-16 after finishing second in the group, while Croatia take on Group C runners-up Denmark. Nigeria and Iceland are out after finishing third and fourth, respectively.

Iceland's first World Cup adventure came to a valiant end as they were beaten 2-1 by Croatia due to a late strike from Ivan Perisic.

Iceland missed a flurry of early chances but went behind in the second half to a lethal strike from Croatia midfielder Milan Badelj, although Gylfi Sigurdsson levelled from the penalty spot in the 76th minute to set up an enthralling finish.

Iceland, the smallest ever nation to compete at a World Cup, are heading home with one point from their tournament debut but will still leave Russia with their heads held high.