France considers how to stop Messi ahead of Argentina clash 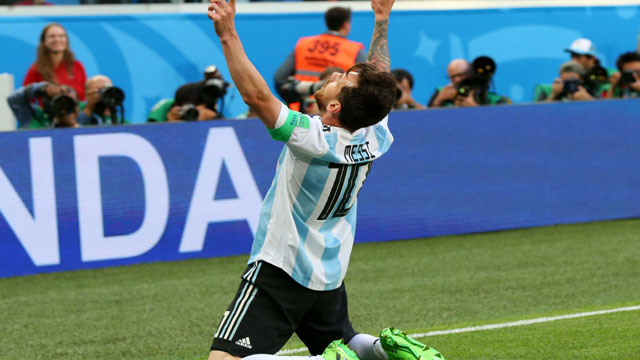 Dhaka, June 30 (Just News): Like any other team facing Argentina, France faces the Lionel Messi question: How to stop the five-time world player of the year?

Unlike many of its rivals at the World Cup, though, France has an answer: a center-half pairing of Raphael Varane and Samuel Umtiti.

France, which plays Argentina for a spot in the quarterfinals on Saturday in Kazan, has been misfiring since the start of the tournament, scoring just three goals in its group matches. But the French defense, marshalled by the pair of Spanish league players, has been solid, having conceded just once.

Umtiti knows Messi extremely well because he trains with the Argentina great at Barcelona on a day-to-day basis. Varane, a regular starter for Real Madrid, has vast experience of playing against Messi.

"I see him every day. It is very hard to stop him," Umtiti said. "He's got outstanding qualities."
Asked if these defenders' knowledge would give France an edge against the two-time World Cup champions, France coach Didier Deschamps said it could be useful.

"Hopefully I can give you a positive answer after the game," Deschamps said. "Knowing him from the Spanish league will not make the difference, but having played against him, similar situations could repeat themselves."

After a difficult start to the tournament, Messi come to life during the 2-1 win over Nigeria in Argentina's last group game, scoring an exquisite goal from a long pass over the defense. This goal aside, his teammates have been struggling to set him up properly.

"He is different with Argentina than with Barcelona," Umtiti said. "He does not have the same players with him, and their way of playing is different but he has saved them on several occasions."

Umtiti, who has 21 caps for France, will start in the heart of the French defense alongside Varane. Deschamps told a press conference Friday that Benjamin Mendy would not play at left-back because of an unspecified muscular injury. The means Lucas Hernandez would likely start at left back and Benjamin Pavard on the right.

While acknowledging Messi's exceptional skills, Deschamps insisted his players will also need to focus on Argentina's other qualities, and notably Javier Mascherano's experience as a holding midfielder.

As a player, Deschamps was confronted with a similar problem when France beat a Brazil team led by Ronaldo 3-0 to win the 1998 World Cup. Ronaldo was arguably the world's best striker at the time, with his speed and fast crossovers making him nearly unstoppable. The French squad spent hours studying "El Fenomeno" before the final at the Stade de France.

"Ronaldo and Messi are two immense players, with a totally different style, but their influence on their teams is quite similar," Deschamps said. "We are facing an extraordinary player, we need to be careful and make sure we give our players a maximum of information. With the talent he has, the smallest thing can create a spark, his unpredictability sets him apart."

Deschamps also hopes his strikers will finally live up to expectations after a forgettable group stage to exploit Argentina's lack of defensive pace.

Despite its immense attacking potential, France has failed do far in Russia to reproduce the intensity that carried Les Bleus to the European championship final two years ago.
Atletico Madrid forward Antoine Griezmann, the top scorer at the Euros who was expected to lead France's attack, has been a target of the French media following three unimpressive showings.

"He had a difficult start," Deschamps said. "But the 65 minutes he played against Denmark did him good, he needs to keep playing to find the right rhythm. Obviously France needs him at his best. He is doing his best to make it happen."