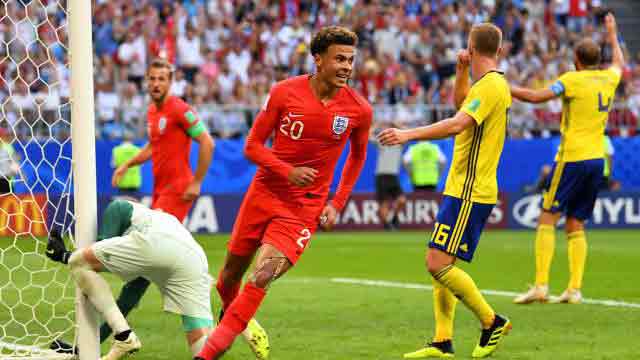 Moscow, July 7 (Just News): A Dele Alli header in the 59th minute has given England a 2-0 lead over Sweden and put his team into a strong position to advance to the World Cup semifinals for the first time since 1990.

England had a 1-0 lead at halftime in the quarterfinal match after Harry Maguire's header from a corner kick in the 30th bounced before it beat Sweden goalkeeper Robin Olson. It was Maguire's first international goal, and England's 10th of the tournament.

For the second goal, Jesse Lingard served up the ball to an unmarked Alli, who nodded in from close range.

It was England's 11th goal in Russia, equaling the national record of 11 goals scored on the run to the World Cup title in 1966.

The winner in Samara will go into the semifinals against the winner of Saturday's later match between Russia and Croatia in Sochi.

Sweden last made it to the semifinals in 1994.

Sweden got its best chance two minutes into the second half on Marcus Berg's header, but England goalkeeper Jordan Pickford pushed it out of harm's way.

Here are the lineups: