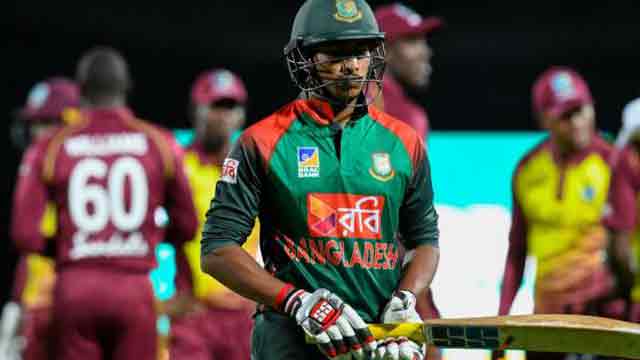 Dhaka, Aug 1 (Just News): West Indies overcame an early scare in their chase to easily win the first T20 against Bangladesh by seven wickets after rain forced Wednesday’s matchto be a curtailed-over affair.

Once the Tigers made 143 for 9, a sudden downpour meant the game was slashed down to 11 overs, with the Windies side set a target of 91.

Paceman Mustafizur Rahmanstruck twice in the second over to remove openers Andre Fletcher and Evin Lewis to give Bangladesh hope, but Andre Russell hit an unbeaten 35 off 21 balls and Marlon Samuels fired 26 from 13 balls to lead the hosts to the win.

Russell, who slammed three fours and three sixes in his match-winning innings, was later adjudged the man-of-the-match.

Tamim Iqbal was stumped in the first ball of the innings bowled by Nurse while Soumya Sarkar was bowled three balls later as the visiting side looked clueless.

Liton Das(24) and skipper Shakib Al Hasan (19) then made 43 in the third wicket to avert further disaster, but Keemo Paul struck in consecutive balls to remove the duo to cause further problems for the Tigers.

Mushfiqur Rahim and Ariful haque added 15 each and Mahmudullah hit 35 off 27 balls to give the score a respectable look.

Top-scorer Mahmudullah fired three fours and two sixes in his innings, but Kesrick Williams then claimed four wickets to contain the Bangladesh charge.

The Tigers now need to win the remaining two matches if they are to end the series on a high. They had bounced back from the Test series loss in a spectacular fashion winning the ODI series, but the first T20 says they have much more to do.