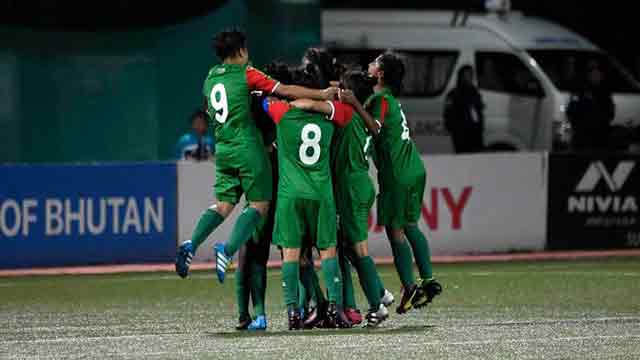 The Bangladeshi female booters beat Nepal by 3-0 goals in their 2nd and last group affairs at Changlimithan Stadium in Thimphu on Monday.

Bangladesh will play hosts Bhutan in the 2nd semifinal on Thursday (16 August) at 7pm while group A champions India will play group B runners-up Nepal in the first semis at the same venue at 4pm the same day.

Earlier, India clinched the group A crown beating host Bhutan by 1-0 goal scored by Silky Devi in the 58th minute.

This was the 2nd consecutive victory for Bangladesh against the Himalayan state Nepal after outplaying them by 6-0 goals in the first edition of the SAFF U-15 Women's Championship in Dhaka last year.
Bangladeshi meritorious striker Tohura Khatun, who made a hat-trick against 6-0 victory over Nepal in Dhaka last year, scored the first goal for Bangladesh in the day's match in the stoppage time (46th) of the first half.

With the day's goal, Tohura shared the 2nd place in the scorer list with Indian Sonam Lambo scoring three goals each after the joint leading scorers-- Shamsunnahar of Bangladesh and Silky Devi of India, who scored four goals each.

Maria Manda scored the 2nd goal for Bangladesh in the 51st minute while Sajeda Khatun sounded the Bangladesh margin in the 67th minute (3-0).

Both Bangladesh and Nepal earlier assured the semifinal berth from the group eliminating all-losers and debutant Pakistan. Bangladesh outplayed Pakistan by 14-0 goals while Nepal beat Pakistan by 4-0 goals.

Last-time runners-up India also reached the semifinal of the six-nation 2nd SAFF U-15 Women's championship as Group A champions with all-win record crushing Sri Lanka by 12-0 goals in the opening match and defeated hosts Bhutan by 1-0 goal in the 2nd match.