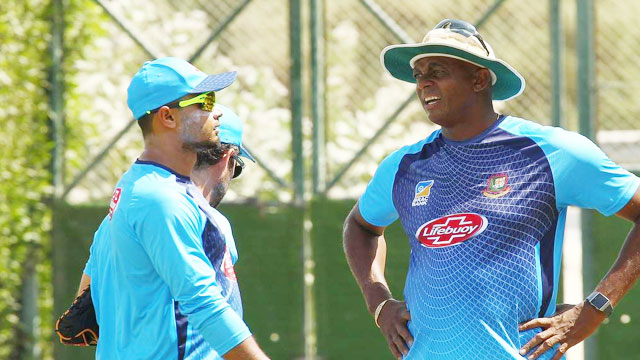 West Indies great and Bangladesh bowling coach Courtney Walsh on Monday warned that bowling conditions in Britain would make the upcoming World Cup a tough test for the South Asian side.

The ten-team tournament will run from May 30 to July 14 in England and Wales.

‘It will be a big challenge,’ Walsh told reporters in Dhaka. ‘There are going to be some good cricket wickets, which are batting-friendly. We have to be intelligent, and try to execute well.

‘We have to read the conditions and the surfaces we play. Some places the ball might swing more than the others. We have to assess when we get there.’

Walsh, who played four World Cups for the West Indies between 1987 and 1999, tipped the bowlers to rely on their variations to be successful.

‘Most of the wickets will be docile and flat. We have to work on our variations and execution,’ he said.

‘Everybody studies one another these days. So they know our strengths and weaknesses. Likewise, we also know theirs.’

The Caribbean star revealed that three of his five charges –- Mustafizur Rahman, Rubel Hossain and Mohammad Saifuddin -- were injured.

‘We need to get them back into bowling, within the right frame of mind, and be sharp enough to do a bit of bowling in Ireland and be ready for the World Cup,’ he said.

Bangladesh, which will also open their campaign against South Africa on June 2 at the Oval, will play a tri-nation tournament in Ireland involving the hosts and West Indies in May as part of their build-up for World Cup.