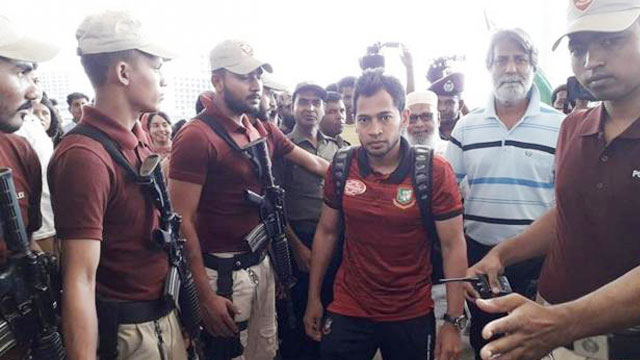 The Bangladesh cricket team left the country today for their upcoming series in Ireland and the World Cup in May. Bangladesh’s ace all-rounder Shakib Al Hasan did not travel with the side but is expected to board an afternoon flight with his family today.

Amongst the 19 members of the squad for the Ireland series, Farhad Reza departed earlier last night. The Bangladesh team flew by Emirates airlines and will reach Dubai first before they wait in transit a few hours and board the flight to Dublin.

Before departure, captain Mashrafe Bin Mortaza spoke of the importance of the series in Ireland ahead of the World Cup. “We chose Ireland for our preparations. The wicket there is very important. We are hoping that we get wickets there which are similar to what we will find in England. I think it is of utmost importance that we win every match [in Ireland]. It would be an added advantage going into the World Cup if we can win there before going to England,” the skipper said.

Bangladesh will play the tri-series tournament in Ireland, slated to begin on May 5, against West Indies and Ireland before leaving for England after the end of the series on May 17. The Tigers will then take part in two warm-up matches against Pakistan and India on May 26 and May 28 respectively. The team will play their first World Cup match against South Africa on June 2 at The Oval.