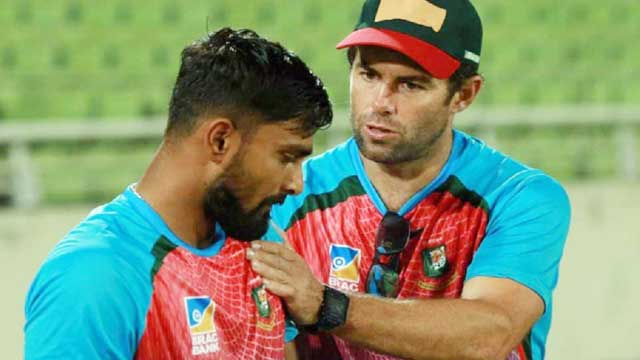 Despite an unexpected defeat in the practice game ahead of the tri-series in Ireland, Bangladesh will turn the things around, hoped Bangladesh’s batting coach Neil McKenzie.

“If you give them (players) enough time in the crease, they will find a way to play better as they are skilled players and have the experience,” McKenzie told the reporters after the practice game against Ireland A.

Bangladesh team was playing against Ireland under the chilling condition while they went to Ireland from the humid sweltering weather of Dhaka. So it was tough for them to adapt with the weather of Ireland so quickly.

However, McKenzie believes Bangladesh can prepare themselves properly in the coming three weeks ahead of the World Cup in England and Wales.

“We have now the tri-series and a couple of warm-up games before the World Cup which will help us to sort out the things,” McKenzie further said to the media.

The first match of Bangladesh in the tri-series will be aired in Maasranga Television and Gazi TV. At the same time, the match will be broadcasted by Rabbithole on YouTube.

Bangladesh have played 34 ODIs against West Indies so far and won 11 of them. On the other hand, the Caribbean boys won 21 matches and two ended with no results.

After the first match against West Indies, Bangladesh will play another three matches in the league stage of the tri-series. If they can finish on top two, they will play another match - the final- against the other team of top two.