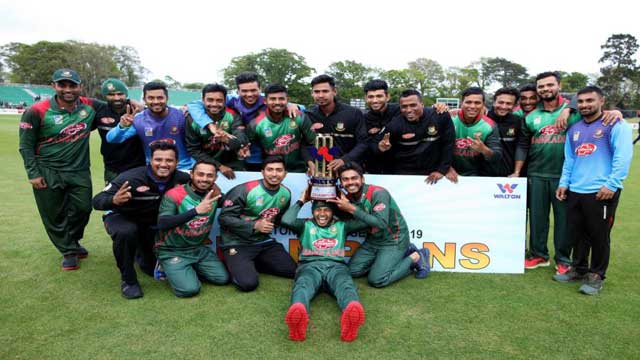 Mashrafe Bin Mortaza’s celebration after a five-wicket victory against West Indies in the rain-curtailed tri-series final was enough evidence to show how significant the triumph was.

The ever smiling Tigers’ skipper hugged everybody once the winning run came from Mahmudullah Riyad and his joys seemed to know no bounds. And why not? Especially since the team was so hungry to break their jinx after so many heartbreaks.

The Bangladesh captain also reminded everyone during the post-match presentation that they previously missed out on a title on six occasions and pointed out that team effort was behind the success. He also praised Soumya Sarkar for his special knocks as well as Mosaddek Hossain for making the Tigers seventh time lucky in the multi-national tournament final.

“Great win. It’s a great team effort. The wicket was good and Tamim [Iqbal] and Soumya [Sarkar] gave the foundation. Mushy [Mushfiqur Rahim] did the job in the middle and Riyad [Mahmudullah] and Mosaddek [Hossain] finished the job brilliantly,” said a jubilant Mashrafe.

“Hopefully after this success more will come. It was fantastic to become unbeaten champions. The success will give the team lot of confidence ahead of the World Cup,” he added.

Undoubtedly, the way Tigers signed off their tri-series campaign, chasing down 210-run target in 24 overs, should give them a lot of confidence ahead of the ICC Cricket World Cup in United Kingdom.