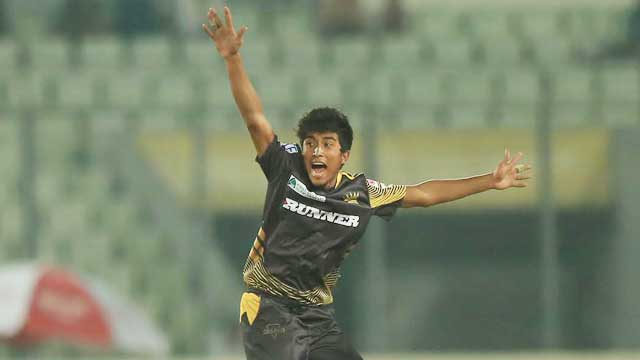 Bangladesh all-rounder Afif Hossain Dhrubo is a happy man as he was picked by St Kitts and Nevis Patriots during the players’ draft of Caribbean Premier League (CPL) 2019 at the Gfinity eSports Arena in London on Wednesday.

Afif is the only Bangladeshi player who will feature in this year’s CPL.

The 19-year-old southpaw will get the company of his former teammate Carlos Brathwaite in the team, who previously played for Khulna Titans in the Bangladesh Premier League. Afif also played for the Titans in the same edition.

“It was a sleepless night yesterday (Wednesday) because I was really excited. I think it’s a big achievement for me to be a part of the CPL. I’ll enjoy playing there. It’ll be my first tour to the Caribbean islands,” Afif told reporters on Thursday at the National Academy, Mirpur.

“I was watching the draft on television. I was excited when they picked me. I’ve never played in a foreign franchise league before. So, it came as a new opportunity for me,” the all-rounder explained.

There are a few Bangladeshi players who have been playing in the foreign leagues for years now. But Afif is the only player who is yet to establish his name in the Bangladesh national side. The young lad believes he is lucky to get a big chance in the CPL.

“I’m a lucky guy. I’ll try to take advantage of it as much as I can. I hope it’ll help me in the future,” Afif further said.

In the last season of BPL, Afif played for Sylhet Sixers where he got David Warner as his captain. The all-rounder said Warner advised him to play giving all the capability in the field.

Afif believes it will not be a tough task for him to adapt with the players of his team in the CPL as he has the experience of playing BPL in three seasons.

The left-handed all-rounder first came to the limelight for his brilliant show in the age-level cricket for Bangladesh. He got his international T20 cap back in 2018 against Sri Lanka in Sylhet. But he got out of the national set-up right after his first match.