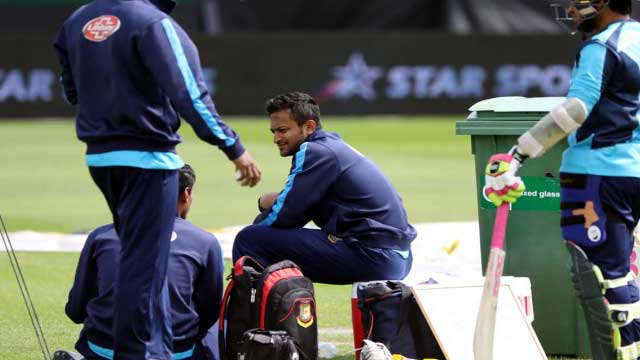 Bangladesh suffered a blow ahead of their today’s World Cup clash against Sri Lanka when star all-rounder Sakib al Hasan became uncertain with a thigh injury.

Sakib picked up the injury on his left thigh during their 106-run loss against England in Cardiff and refrained from training in Bristol on Monday.

He underwent a scan in Bristol on Monday the result of which could not be ascertained yet.

A team spokesman told New Age that Sakib is unlikely to be risked in the Sri Lanka game if the scan reveals minimum damage.

‘Bangladesh all-rounder Sakib al Hasan suffered a left thigh strain while batting during the ICC Cricket World Cup match against England in Cardiff. He underwent a precautionary scan today in Bristol. We are waiting on a specialist assessment and report,’ Bangladesh team physio Thihan Chandramohan later said in a statement

Sakib is the team’s leading performer in the World Cup, scoring 260 runs in three matches - the highest among all batsmen so far.

He was the man of the match in 21-run win against South Africa with 75 runs and two wickets before making 64 off 68 balls against New Zealand.

On Saturday, Sakib became only second Bangladeshi ever to hit a century in a World Cup match when he smashed 121 off 119 balls against England.