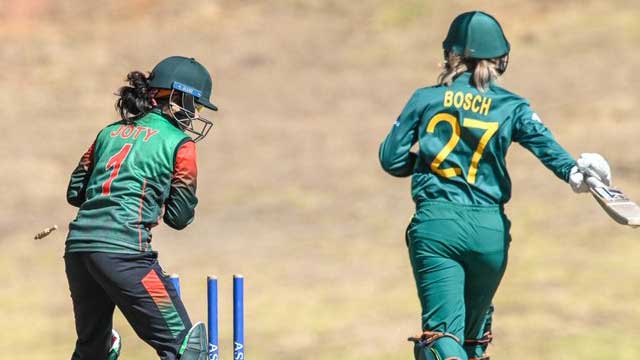 Opener Sharmin Akhter showcased a resilient batting performance as she made an unbeaten 83 to help her side reach 179/1 in 44.4 overs after her teammates had restricted the opponent for a lowly 176/7 in 50 overs at Groenkloof Oval, Pretoria.

Bangladesh, who won the second match by four wickets to bring parity in the series after conceding a 47-run defeat in the first match, decided to field first.

But, South African openers made a solid start as they formed a half-century partnership.

Leg-break bowler Fahima Khatun got rid of Tazmin Brits for 37 in the form of caught and bowled when the score was 65 in the 15th over.

Off –break bowler Khadija tul Kubra, who was adjudged player of the match in the second game, bowled out another opener Robyn Searle for 35 in the next over and opened the floodgate of wickets.

Host women lost wickets in regular intervals from that point as Fahima grabbed three scalps and Khadinja bagged two wickets but wicketkeeper-batter Trisha Chetty held one side firmly and her 86-ball innings of 63 runs saw her side finish with a total that may have challenged the visitor.

But, the determined effort of 23-year old Sharmin did not allow that to happen.

She made a cautious yet flowing start while chasing the mediocre target with her opening partner Murshida Khatun before their partnership broke in the 18th over when the latter was run out for 31 leaving her side on 75.

However, Sharmin got another brilliant partner in the form of her captain Nigar Sultana and the pair batted with sheer maturity to navigate their side home.

Sharmin consumed 137 balls in his innings that was adorned with 10 boundaries and although her strike rate was barely 60, it was the call of the day and she was duly adjudged player of the match.

Nigar, the victorious captain, also showed similar doggedness, as she consumed 84 balls for her 48-run innings but made sure she remained till the end to secure the series.