Day 2:Afghanistan bowled out for 342 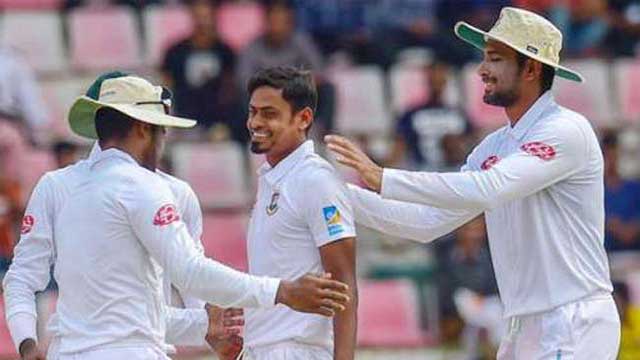 114.4 - Afg 341/9: Rashid hits Shakib towards mid off to run a single and complete a run-a-ball half century. The Afghan captain has been the aggressor this morning. Two fours and three sixes in this innings, the last one coming off Shakib in this very over.

112.4 - Afg 327/9: Shakib has gotten another one today after going wicket-less yesterday. Rashid losing partners at the same rate he is scoring runs here. Umpire initially gave not out but Bangladesh reviews again. Ball took the inside edge before going to Soumya at slip Yamin Ahmadzai c Soumya Sarkar b Shakib Al Hasan 0 (7b 0x4 0x6) SR: 0.00

109.3 - Afg 322/8: Taijul hits Rashid on the pads. Umpire gives not out but Bangladesh reviews. Third umpire finds that Taijul has bowled a no-ball! Taijul does a Jack Leach, who bowled a no-ball to Steve Smith while on 118. Smith made England pay dearly with a double ton.

109.1 - Afg 322: Dropped! Rashid looks to whack one off Taijul. Gets an inside edge which hits Musfiqur Rahim on the pads.

105.2 - Afg 299/7: Clean bowled! Very good length, Taijul pitching it up and this time it turns sharply in front of the bat and beats Afsar's edge and castles him. What a delivery! Taijul has bagged his fourth and Afghanistan have lost both their set batsman this morning after Taijul had earlier bagged the scalp of Asghar for 92 Afsar Zazai b Taijul Islam 41 (115b 4x4 1x6) SR: 35.65

99.6 - AFG 278/6: Four overs into the start of proceedings on Day 2. Taijul Islam makes the much-needed breakthrough for the Tigers, sending back the well set Asghar Afghan. Asghar Afghan c Mushfiqur Rahim b Taijul Islam 92 (174b 3x4 2x6) SR: 52.87 Went for the wild slog, perhaps looking to assert his dominance in the same manner that he managed yesterday. Only manages to spoon it to Mushfiqur Rahim behind the wicket. Taijul bags his third and it brings Afghan skipper Rashid Khan to the crease.

9:59 am: The players are out in the middle and Mehedi Miraz will start proceedings for the Tigers. The first session is crucial for Afghanistan in order to really make Bangladesh sweat here.

It’s Day 2 in the one-off Test match between Bangladesh and Afghanistan. The visitors have shown the capacity to play the waiting game and take chances whenever they presented itself, evidenced by Rahmat Shah’s ton and Asghar Afghan’s innings. The Tigers' spinners have not always made home advantage count and the track still looks quite good for batting.

Asghar would be eyeing a ton as well while Afsar Zazai had also played well for his 35 yesterday.

With the aim being to outplay the opposition with spin, the home side were desperately hoping for assistance from the pitch at the Zahur Ahmed Chowdhury Stadium (ZACS) in Chattogram, where Shakib gambled on winning the toss and batting first.

But luck did not favour the hosts as Rashid Khan won the toss and expectedly opted to bat. There was then not much of a threat from a Bangladesh spin department that has less variety when compared to Afghanistan’s wide range of spinners in leg-spinners like Rashid Khan, Qais Ahmed, chinaman bowler Zahir Khan and off-spinner Mohammad Nabi.