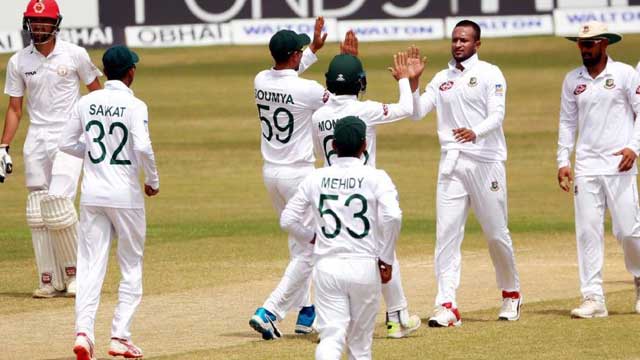 Afghanistan set their eyes on another Test win as they have already taken a 374-run lead against Bangladesh at the end of the day-3 of the one-off Test at Zahur Ahmed Chowdhury Stadium on Saturday.

Before the bad light halted the play, Afghanistan scored 237 runs for eight wickets in 83.4 overs in their second innings of the match. And they also secured a lead of 137 runs in the first innings.

At the start of their second innings, Afghanistan were shrugged by Shakib Al Hasan’s double strikes in the very first over. Bangladesh captain removed Afghan opener Ihsanullah and centurion of first innings Rahmat Shah in consecutive two deliveries.

Within 28 runs, they lost another wicket when Nayeem Hasan removed Hashmatullah Shahidi for 12. But coming into the fourth wicket stand, Afghanistan recovered their shaky start as Ibrahim Zadran and Asghar Afghan added 108 runs.

Asghar continued to dominate over the Bangladeshi spin attack as he pulled off another Test fifty after hitting 92 in the first innings. He fell prey to Taijul Islam hitting 50 off 108 deliveries.

Afsar Zazai, who had scored 41 in the first innings, came up with another good knock this time around. He remained unbeaten on 34 at the end of the day.

However, Mohammad Nabi (8) and Rashid Khan (24) were stopped by Bangladeshi bowlers before they became dangerous.

Earlier, Bangladesh tumbled for 205 in their first innings while replying to Afghanistan’s first innings total of 342. Bangladesh managed to add only 11 runs resuming their overnight score of 194 for eight. They were dismissed within 17 minutes of play of the day-3.

Mominul Haque hit 52 which was Bangladesh’s only fifty in the match so far while Mosaddek Hossain Saikat remained unbeaten on 48.

Afghanistan won the toss in this match and opted to bat first. They accumulated 342 runs in the first innings, which is now their highest Test total.

Rahmat Shah was the main pillar of Afghanistan’s innings as he hit the maiden Test ton (102) for Afghanistan. Asghar Afghan (92) was close to hitting another ton but fell short by eight runs. Rashid also impressed with the bat (51).

Before this match, Afghanistan played only two Tests. In their first attempt to the most prestigious form of cricket, Afghanistan suffered a big defeat to India. However, in the second attempt, they beat Ireland.