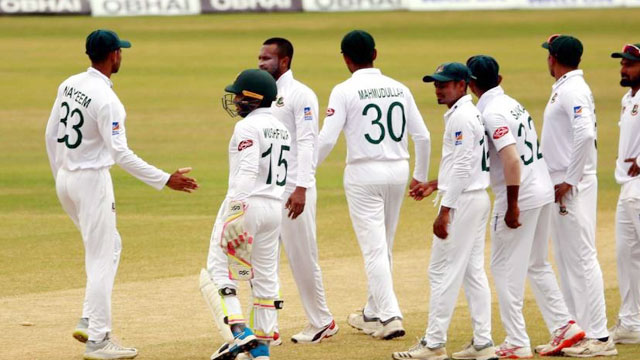 Rain pushed the game to fifth day while Bangladesh continued their struggle on the 4th day of the one-off Test against Afghanistan at the Zahur Ahmed Chowdhury Stadium in the port city here on Sunday.

The rain came around 4:30 pm while tigers were struggling hard to avoid defeat to an amateur rival and stopped the game for day-four.

Before the rain, Bangladesh scored 136 for 6 in 44.2 overs in their second innings with Shakib Al Hasan and Soumya Sarkar in batting with 39 and 0 respectively.

Bangladesh needs another 262 runs to seal the victory with only four wickets and a day in hand.

The hosts started their second innings on a cautious note but failed to execute their plan. Liton Das was the first man to get dismissed by chinaman-bowler Zahir Khan. Liton missed the line of the delivery which pinned on his pad.

Bangladesh team management promoted Mosaddek Hossain to bat at number three but the right-hander disappointed to capitalize the chance. He went for a fancy shot off chinaman-bowler Zahir Khan and skied the ball. Asghar Afghan took an easy catch at long-on to remove him.

After that, all of Mushfiqur Rahim, Mominul Haque and Mahmudullah Riyad fell prey to captain Rashid Khan. In 125 runs, Bangladesh lost six wickets and they now have very little hope to getting something memorable from this game.

Earlier, Afghanistan scored 260 all-out in their second innings which helped them to stretch the lead to a massive 397 with their first innings lead of 137, meaning Bangladesh need to score 398 to win this game or bat for rest of the match to end on a draw. However, both are unlikely to happen from this point of game.

In their first innings, Bangladesh tumbled for 205 all-out which was the main reason behind Bangladesh’s downfall in this Test. Mominul Haque hit 52 which is Bangladesh’s only 50-plus score in this game so far.

On the other hand, Afghanistan posted 342 runs in their first innings riding on the maiden 100 of Rahmat Shah and 92 of Asghar Afghan.

After their batting heroics, Rashid Khan displayed why he is number one leg-spinner in the world currently taking his second five-for in Tests conceding 55 runs. Along with him, Mohammad Nabi bagged three wickets as well.

Bangladesh never won a Test scoring more than 217 runs in the fourth innings of a Test match. So the Chattogram Test is now really out of reach for Shakib and his men.

On the other hand, Afghanistan are hoping to seal the game on Monday in spite of the forecast of rain on Monday at Chattogram. If the rain allows them to play only a session tomorrow, that might be enough for them to register a historic win over experienced Bangladesh.