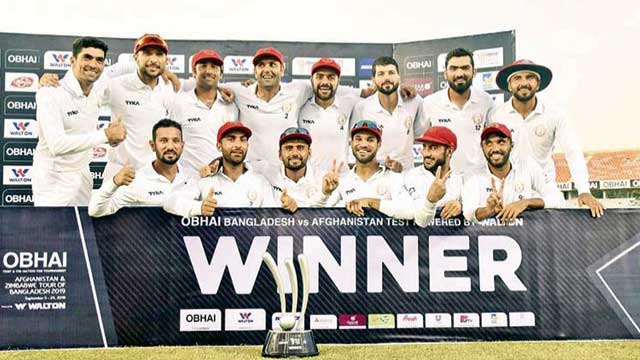 Rashid Khan grabbed five-wicket in both innings as Bangladesh suffered an embarrassing 224-run loss to Afghanistan in the one-off Test in Chattogram despite huge favour from rain on the fifth and final day on Monday.

The Tigers had to bat out just 18.3 overs in the final session to save the Test after long rain-break but they were unable to do so, having been dismissed for 173 runs in their second innings.

Rashid led his side from the front to claim three of the remaining four wickets and finished with 6-49, bowling out Bangladesh with 20 balls left to complete an emphatic win - the second win for Afghanistan only in their third Test.

Rain seemed to have the final say in the game when it wiped off the first session and came in abundance after just 13 balls of play following a 1:00pm start on the fifth day.

Bangladesh, who resumed at 136-6, remained unscathed during this short period of play as two overnight batsmen Sakib al Hasan and Soumya Sarkar survived to add seven runs before play was suspended.

Afghanistan were left frustrated as rain showed no sign of relenting only to go away just in time to hold some play for little over an hour.

With light fading fast and Rashid raring to go it came as a huge test of character for Bangladeshi batsmen, who stumbled at the start after play resumed at 4:20pm.

Left-arm Chinaman Zahir Khan dealt Bangladesh’s hopes for a survival with a serious blow when he dismissed Sakib in the very first ball after the resumption.

Afsar Zazai took a sharp catch behind the stump to remove Sakib for 44 and Rashid did the rest.

Debutant umpire Paul Wilson declared Taijul Islam leg-before out in Rashid’s next over after a long thought but television review indicated that the ball took a feather touch on Taijul’s bat before hitting his pad.

As Mehedi already wasted Bangladesh’s last review Taijul had no choice but to trudge back to leave the last wicket pair of Soumya and Nayeem Hasan to survive 7.3 overs, something they failed to do despite their best effort.

Soumya was the last man dismissed when he flicked Rashid to Ibrahim Zadran at short leg, which triggered a wild jubilation in Afghanistan tent.

Rashid, who made his debut as youngest ever Test captain in this match, finished the game with 11 wickets, which included a first innings haul of 5-54.

Rashid, who also made 51 and 24 runs in two innings, was duly named man-of-the-match.