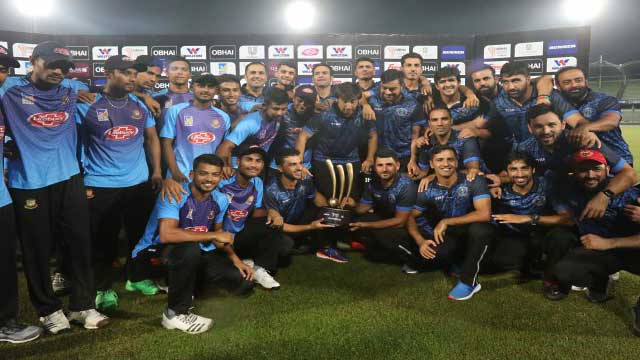 Bangladesh and Afghanistan shared the trophy of the tri-nation Twenty20 tournament after rain washed out the final at the Sher-e-Bangla National Stadium in Dhaka on Tuesday.

Match officials declared the game abandoned at 9:00pm as rain showed no sign to cease, making it impossible to start even a truncated game.

The cut-off time to hold the toss for a minimum five-over game was 9:30pm.

The wash out meant Bangladesh got now a hand in the trophy of multi-team Twenty20 tournament for the first time in their history.

It also rounded off a mixed tournament for Bangladesh, who won three of their four matches in the league phase.

They also won a tri-nation one-day international tournament in May when they beat West Indies in the final in Ireland.

Afghanistan’s Rahmanullah Gurbaz was named player of the tournament for making 133 runs in four innings.